The 90's weren't able to escape my dime box invasion, as there were a few cards from that era as well. I mean, there were truly some wonderful photos for the ages out there... 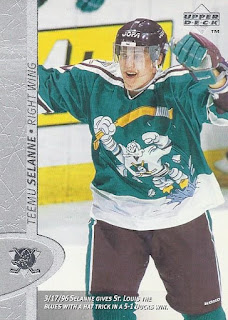 such as this mercifully short-lived uniform of the damned. Poor Teemu. 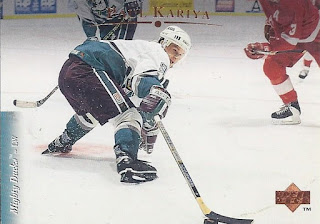 Or Paul Kariya's best side, 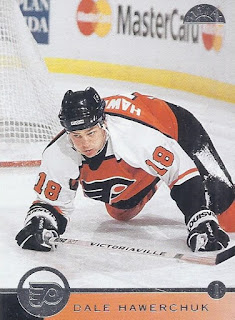 Dale Hawerchuk falling on his face, 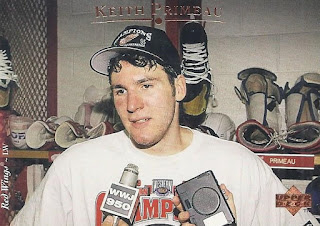 Keith Primeau proudly sporting a Western Conference champs jersey and cap, since the Wings lost in the finals that year to the Devils, 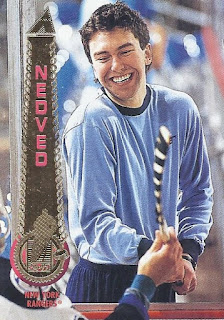 and even a Pinnacle card featuring Petr Nedved without the jersey and with a derpy look on his face. And in 1997, Pinnacle also gave him a card without a uniform, but with still another filthy looking blue shirt. Did he annoy someone at the company? Enough so that they still had a grudge years later? 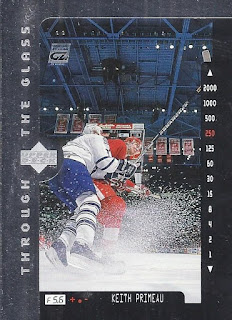 OK. Here's something nicer. These low angle shots hadn't made too many appearances in sets at this point, so this was pretty unique for the time (1996). 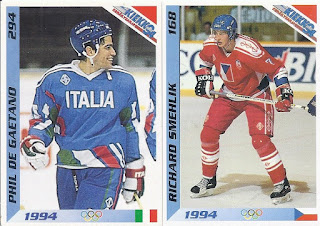 I had no idea what these were when I grabbed some from this set out of the dime bin. It is from a Finnish release with an international theme. I really like the Italian jerseys from whatever tournament this came from, the classic Azzurri blue but still with the flag.

And how about wrapping this up with a trio of autographs? That I picked up out of a 3 for $2 bin. It was a good thing I stopped with just these 3, as I'm certain I could have walked out of there with the entire box had I not controlled myself. Here, a trio of guys with decent careers, but only had certified autos in these releases. I thought Gord Muprhy might have showed up in a release from ITG, but apparently not. As for the others, that's fishermen intensive.

And that wraps up another decade.
Posted by buckstorecards at 07:43