While some of the offerings from O-Pee-Chee this year are nice in terms of mask binder cards, the retro parallels for the set are cropped for a closer view, henceforth I added those to my wantlist as opposed to the regular ve3rsions. 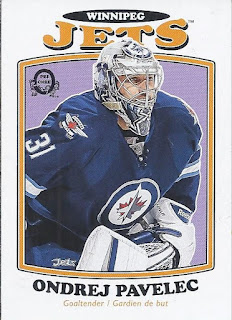 Hey! A chance to use the BRUUUCE tag on a post that has nothing to with Bruce Smith. Pavelec used his mask last year to show off his love for Bruce Springsteen, with Born to Run era Bruce (and the Big Man) on the side visible on this card, with art of River, Born in the USA and Magic era Bruce on the other (seen on his MVP card, which is in my COMC inventory). 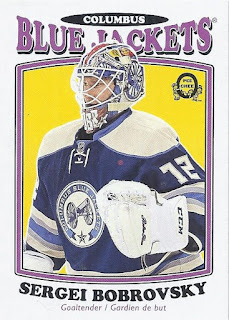 Sergei goes for the simple with the cannon logo, but you can still see a little bit of Russia lurking on the mask, with a Russian nesting doll looking like it is ready to fire the thing. 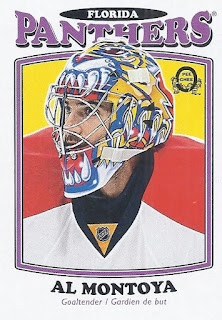 So, this one's dated already. But it is a nice version of the classic where the creature that is the team's nickname is devouring the the player's face. 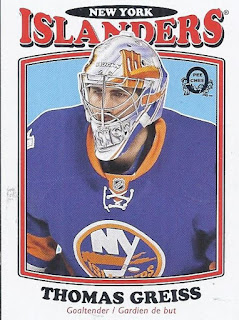 With the team's move to Brooklyn last season, the Brooklyn Bridge making an appearance on Thomas Greiss' mask was perfection. 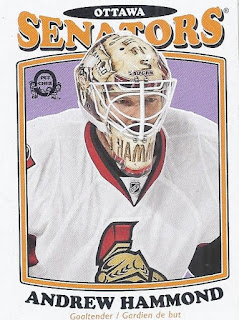 Of course, the Hamburglar would be lurking on Hammond's mask. 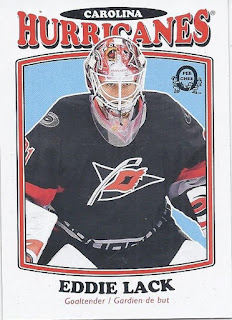 Why shouldn't a Swedish player salute another famous Swede on his mask? If you look at the bottom, one can see The Swedish Chef lurking on the chin. One of his unfortunate chickens is very visible atop the mask.