While there were four cards yesterday that made their debut into the 2/14 binder for Nikolaj Ehlers, the big winner in terms of volume was Milan Hejduk, who got 5 new cards to his name. Actually, I had 8 cards, but those were all dime box dupes. 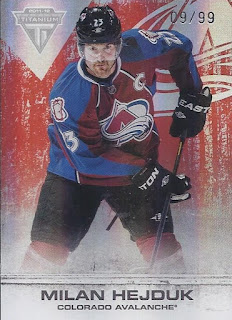 This was one of two non-dime box cards that went into his section of the binder. As I said earlier this week, I love cards where that if the background of the photo is wiped, it is replaced with the team logo. It looks even nicer on this red parallel where the red makes it pop even more. 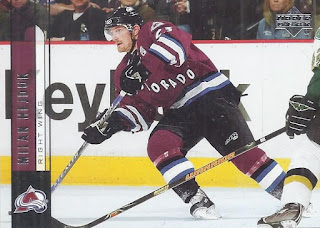 I was certain I had this UD base card in the collection, but double checking the binder showed me otherwise. 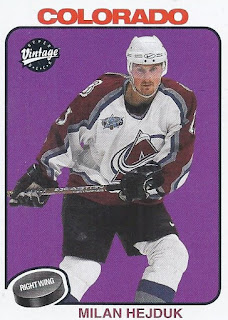 While everything looks nice a vintage-y with this card, the glossy coating does kinda kill it. Still, you do a get a nice 1975 vibe with this look, with just a hint of 1971 and the one colour background. 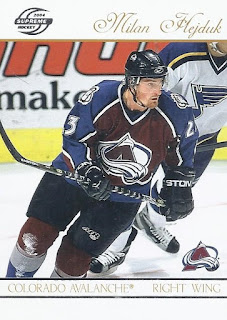 The font used for the player name seems a little too civilized for a hockey card. 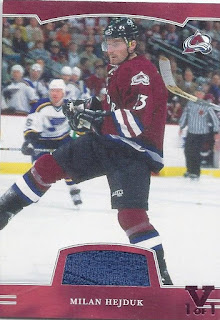 And the final Hejduk card for me was this buyback from Vault. The purple stamp indicates that this isn't a 1-of-1, and that there are actually 8 of these buyback cards throughout the release. At least 8. Still, this was cheap, and that is a nice thick seam in the lower corner.

Tomorrow, all the rest of the 2/14 cards make their appearance.
Posted by buckstorecards at 07:09

Email ThisBlogThis!Share to TwitterShare to FacebookShare to Pinterest
Labels: 2/14, shows