Seems like a good day to show of some Mets that I have yet to post. Some of them are from a long ago card show that I had still to post, the rest from a Bob Walk the Plank mailing.

The old card show card were three vintage ones grabbed from a 3 for $2 bin. There's something about 1962 Mets cards that make them difficult to pass up, even if way before my time. These were the last regular cards for Taylor and Chacon, but Jerry would stay with the team well into the 70s, meaning he was part of the '69 Miracle Mets. 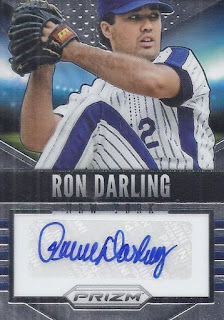 The rest are all from the BWtP mailing. I'm just going to go through them in the order they uploaded. I always feel that after I post a Darling auto, I should link to this TMZ video about his penmanship. 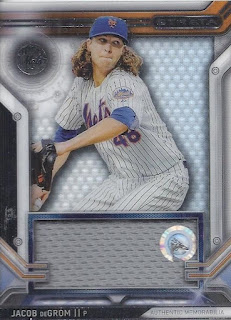 Since this is Strata card, I can input the MLB authentication number and find out what game the relic is from. It comes from the 9/9/15 game, where DeGrom gave up 2 runs over 7 innings on his way to a W over Washington. Not as interesting a game as the Derek Norris one in my 2/14 collection (golden sombrero and a walk-off grand slam), but the tracing element is still a major nicety for these releases. 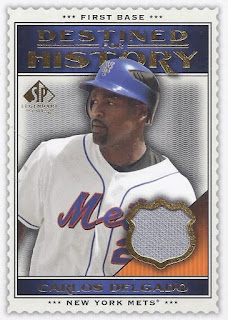 Delgado swatch! I've got to be closing in on being able to make my own One Piece at a Time-ish full Delgado jersey by now. 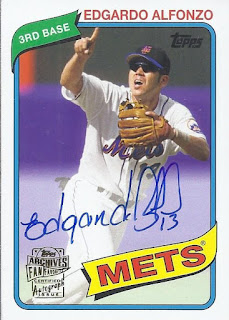 I admit I thought I already had an auto of his in my collection. Turns out it was merely a swatch. He definitely fits into the mold of a player for the Fan Favorites subset, and I love that for bringing on-card autos of recent players who were not quite superstars, but were still really good and worthy of notice from modern collectors. 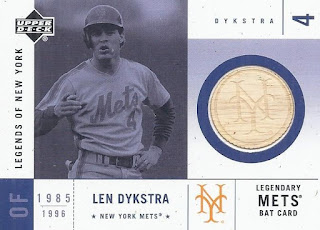 How do you make a bat relic even better? Add the team logo to it! 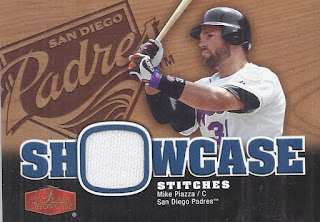 I guess this is technically a Padres card, what with their logo taking up more card real estate than Piazza, but this is still a Mets card as far as my binder is concerned. 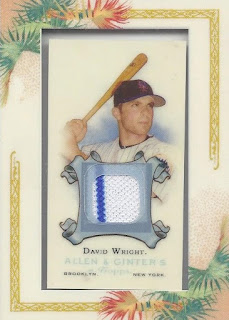 If I don't put a Delgado jersey together soon via swatches, it might be because I have more David Wright fabric available. 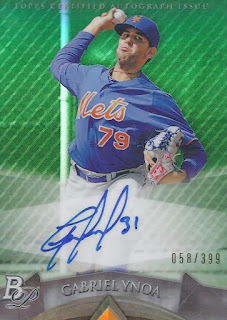 And to wrap it up, a prospect autograph. Ynoa was signed my the Mets as a free agent back in 2009, and made his MLB debut this past season at the age of 23. I like that he has 31 on the card, despite wearing #79 on the card. Of course, he's now wearing a different number in the bigs - #63.

There you have some Mets for your Monday! I've got a pile of base cards put aside for BWtP, and hope to add some autos or relics at the Expo this weekend.
Posted by buckstorecards at 13:02