At least it is 2016 as some of the 2016-17 hockey releases have hit the market. OPC drops later this week, and MVP and UD Team Canada Juniors have already hit the market. Time to sample a pack of each. 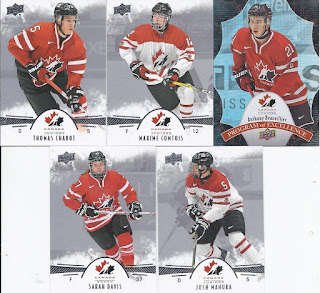 The first card out for me from Juniors was Thomas Chabot. He was a first round pick of the Senators in 2015, so of course this qualifies as a Senators card. Maxime won't be eligible for the NHL draft until next season, but he's already pegged to go as high as 3rd overall in mock drafts. The shiny insert of Anthony Beauvillier continues the QMJHL run, and he was also a first rounder in 2015, going to the Isles. Sarah Davis brings the ladies content, and it ends with Anaheim's third rounder this year in Mahura.

Although no hit, anything that brings a new face to Senators binder is OK by me. It is even better when there are whispers he's in the running to make the team this season at just 19. 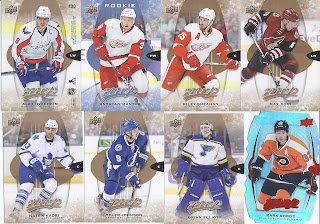 MVP is a lower end set, but there still were some nice cards out of the pack. First up this time was the Domi. I definitely prefer this design to some of the more border-intensive releases of the past. Mantha is a SP'd rookie. Ovechkin is the puzzle back variation (the cards all have variations with 9 piece puzzles, Ovie is actually the checklist card). Streit is a die-cut teal variation. This one wrapped up with a Rangers alumni card in the Kadri.

I definitely preferred the Juniors cards to the MVP, but each did land some content for the various binders, so no real strike-outs with this either.
Posted by buckstorecards at 06:48