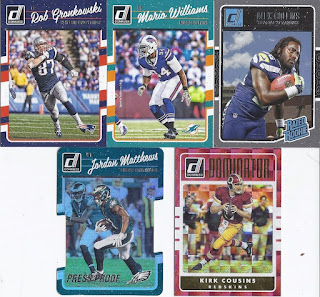 Pack 7: The lesser Gronkowski (Glenn Gronk 4EVER!) started this pack off. Mario Williams' move to Miami wasn't significant enough to warrant a photoshop job into the new unis. Both inserts were numbered. As expected, the Dominator insert was gaudy. The Matthews is considered a Press Proof Silver Die-Cut parallel. Quite the mouthful. 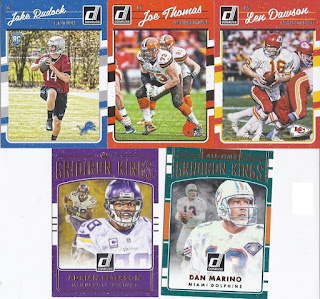 Pack 8: In a rarity, the most interesting photo in this pack is the rookie card, featuring a mini-camp photo. Jake Rudock's photo reminds me of Luis Alvarado's 1973 Topps release, and the beautiful view of a parking lot. Outside of that, there's a legends card of Len Dawson and a rare appearance of an offensive lineman (almost as rare a sighting as a kicker) for base cards and a pair of Gridiron King inserts. 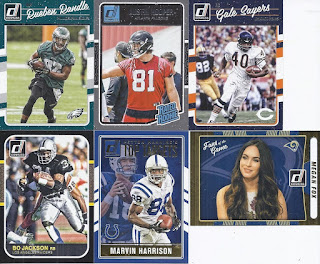 Pack 9: My first pack with 3 inserts, and it brings an interesting variety - from Megan Fox to Bo Jackson in the same pack. For the base cards, Reuben Randle was also was able to avoid the photoshop treatment on his card. A nice legend in Gale Sayers as well. 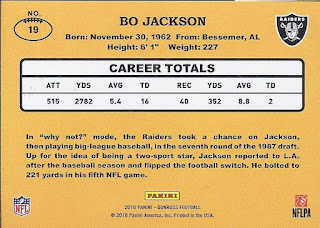 The 1987 insert is interesting, but I'd rather they kept a little truer to the original set, and used Vincent Edward Jackson on the reverse of the card 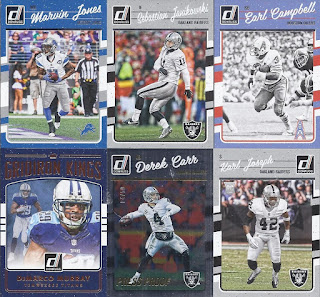 Pack 10: It took this long to get a photoshop special card, but one finally shows up with Marvin Jones, as his Bengals uniform has changed to a Lions one. Without seeing the checklist, I'm guessing I've pulled the second and final kicker card with Janikowski. As I wrote in my first box break post, it is surprising to see Earl Campbell grouped with the Texans portion of the set. The Derek Carr is a gold /50 press proof parallel,  and since it is numbered 4/50, Derek jersey #, it is an ebay 1/1! If you're a douche, that is. 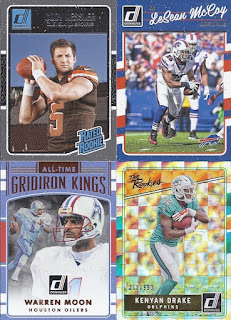 Pack 11: At least I landed a Bills card. 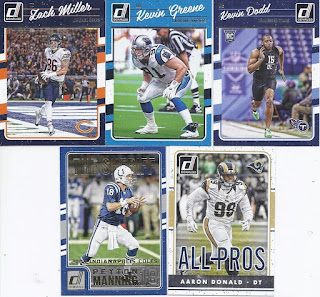 Pack 12: It's WCW alumni Kevin Greene as the Panthers Legends rep! WOO-HOO! Zach Miller hitting paydirt for a TD is the best in-game photo in this grouping of cards.

And there's the halfway point of the box. 3rd quarter goes tomorrow.
Posted by buckstorecards at 11:41