Time to start the second half! 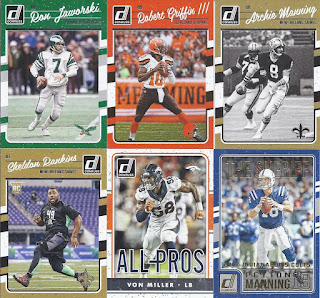 Pack 13: A couple interesting legends cards in this. I love when B&W photos make an appearance in contemporary sets, and it really contrasts nicely with this base set's colourful design. RG3 doesn't avoid photoshopping, but at least his name translates nicely to the design. 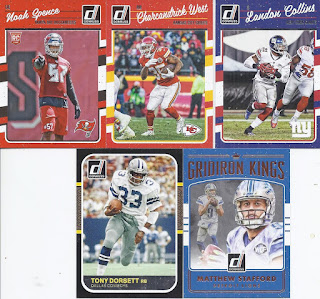 Pack 14: A cool name in Charcandrick West. That isn't enough though to lift it to the status of the best card of the pack, since that will go to Landon Collins and the always "defensive player with the ball". The only problem is that this was part of his post-interception celebration, as he didn't get to return the ball. Still, a football card rarity. 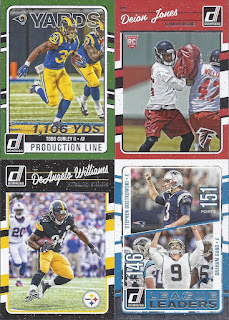 Pack 15: Pretty bland base pack. DeAngelo Williams gets the nod only because I liked how Steelers colours looked in this design. But, the inserts are interesting, since I now know that it is Todd Gurley II on his cards. Even though I already pulled a Gurley insert in an earlier pack and didn't notice. And kickers! On an insert card nonetheless! 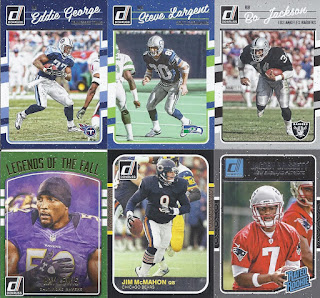 Pack 16: My first insert dupe, as I'd previously found the Lewis in one of my miscellaneous packs. But this pack was really legend intensive, as 3 of their base cards was the most per pack so far. Eddie George does seem like a peculiar choice when they already used Earl Campbell for frachise history. But maybe that's because 2/14 collecting me wanted a new Steve McNair card to chase. This pack also contained a Teddy Bridgewater card, which was notable since it was the first Vikings non-SP base card I'd pulled so far. The Bills and Rams are second at this point with only 2 cards each. 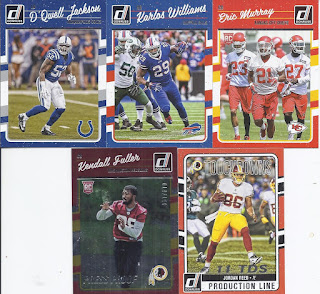 Pack 17: But, the Bills get their third representative in the box with this card of Karlos Williams, idiot. So, I go the name route and proclaim D'Qwell Jackson as my favourite base card in this. Washington goes 2 for 2 on the other cards, landing both an insert and a /100 parallel. 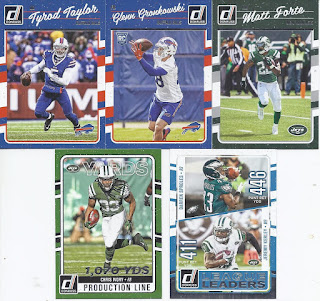 Pack 18: Finally, a nice Bills pack with Tyrod and baby Gronk making appearances. I'll make this a very AFC East post with some Jets cards. Although Ivory was 'shopped into a Jags uniform on his base that's negated with Forté getting the same treatment on his base card.

6 more packs left, one of which will contain my final hit.