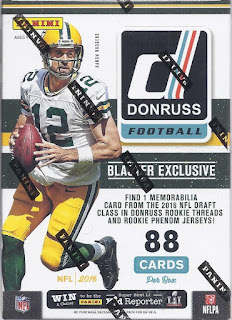 The set build is on! There are retail options for Donruss, so I can continue to make dents in the set build without hitting the LCS. For today and tomorrow, the contents of a blaster! This time around, since these are 8 card packs, I can scan the entire contents of them in groups of 5 and 6, with 5 going to which ever group included the promised relic. 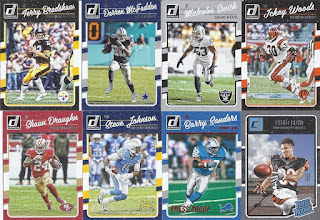 So, Stevie Johnson is dropping important passes in a Chargers uni now. That's nice to know. I'm assuming the red press proof cards are exclusive to retail, since I didn't get one in the hobby box. Ickey is a dupe, but how can anyone get upset at pulling a dupe of Ickey Woods? 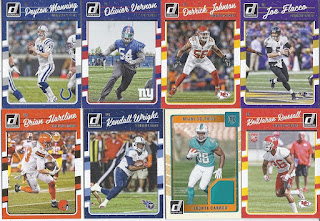 I guess this will be the 5 pack post, since the relic showed up here. There's a slight seam in the relic, which may not be visible in the scan, making it slightly more than a plain swatch. The ink is barely dry on Manning's retirement papers, and he's already showing up as the Colts entry into the legends portion of the base set. 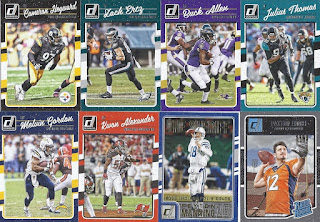 Paxton Lynch might not be the starter yet in Denver, but this will likely be the best rookie pull in the blaster. The facial hair, though, is pure 90s boy band. Kwon Alexander is the first player I've picked up a third card of so far. Fortunately, the rest of the base cards were needs. 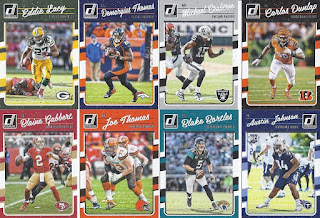 Great photo with the Eddie Lacy, as he leaves some poor defender in his wake. 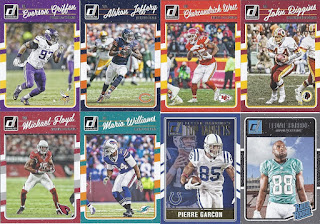 With the second appearance of Carroo in the same post, I'm guessing this particular blaster should have been sent to southern Florida as opposed to sourthn Ontario. I note that the base card got the accent on Garçon correct, while the insert didn't. Also, 2/14 baby Alshon! Unfortunately, that's only my first card of his, so I'll need a second one for that binder.

The other 6 packs tomorrow!
Posted by buckstorecards at 05:07