Even though I try to grab one each time I make a stop at the Dollarama for something, it always seems too long since I've last tried my luck to see if I get $2 of enjoyment out of it. 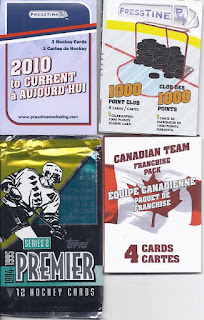 I've already got a surprise in this, as I really wasn't expecting a pack of 1995 Premier to come out of this. It is always fun to bust a product you've never busted before. 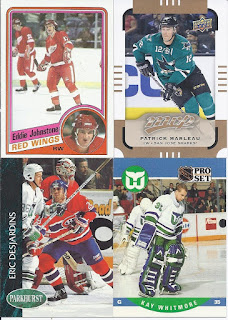 Patrick Marleau is the 1000 point man here, even though he had yet to reach that plateau when this card was issued. Finding an 80s card lurking in here was a nice bonus. 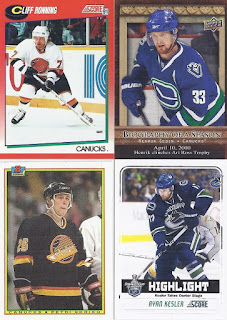 These are definitely 4 cards from a Canadian team. It wouldn't be a repack without some sort of 1990 Bowman appearance at one point.

And here's a second surprise of the break - that Mason McDonald card. The ITG Prospects was a little more high end than in previous years, going to the 1 pack format per box. So, even a base card coming from a repack is out of the ordinary. I'd pulled an auto of his from a previous BTP box break, and it is among the worst (penmanship-wise) in my collection. So, maybe I'm better off with just a base card?

My first card out of the Premier pack was the Bob Errey, complete with a major ding on the corner. At least that got followed up with my only Sens card in the break, and a Special Effects parallel of Craig Simpson (which the back of the pack says fell at a rate of every other pack). 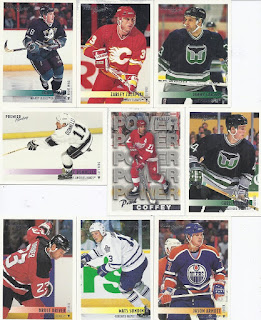 And with the other 9 cards, the other problem with the pack is evident, as the cards were stuck together, coming out of the pack as a big block of 12. They separated relatively easily, though, but left some evidence of each other behind. That's particularly noticeable on the Zalapski. Of the rest, the Jimmy Carson seems to be a need for Shane @ Shoebox legends, so at least I'll have one card to keep the Ron Francis dual relic company.  Of the rest, you get Bruce Driver ready to drive the puck in a bit of name perfection, a nice photo on Donnelly with the full extension, and a Kitchener Rangers alum in the middle. A couple keepers and a trade card makes it a pretty good pack, and repack as a whole.

And there you have it.
Posted by buckstorecards at 07:45