It is that time again! It is time to contact Panini and request replacements of redemptions that I didn't really want to spend any more time waiting for. 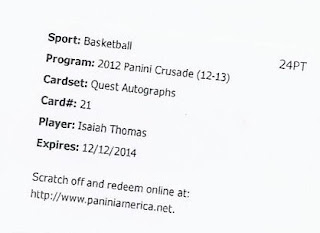 I was surprised this one wasn't fulfilled, as there were versions of this at COMC. I decided to stay with what I had, and see if I could get another Thomas card. I requested a Celtics one, but that was not to be. But I was fine with getting a Kings (or even Suns) version of the all-star. 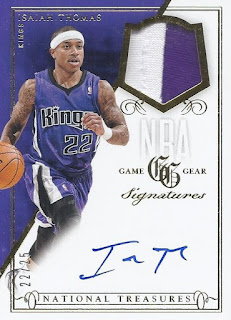 This isn't a rookie autograph, but that's all I can say bad about this upgrade. The auto is on-card, and it includes a nice two-colour swatch. A National Treasures card is also a bit of a step up from a Crusade. And something I didn't notice in the notification, but did in-hand was that the 22/25 card is numbered to his number. 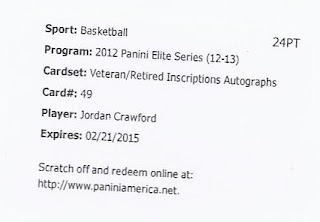 When I pulled this card earlier this year, I had no doubt that I'd be asking for a replacement for it. A look at COMC showed no live cards of this at any point, which didn't bode well. For this one, I requested it be fulfilled with a Celtics auto. 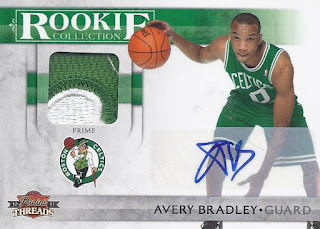 Yup. This is a huge upgrade. An auto of someone who isn't even playing in the NBA at this point for a rookie auto of someone who is still with the team. And that patch is pretty nice to. It sure looks like it came from one of the shamrock leaves on the back of the jersey. I was happy with this even when I didn't know that it would be a pretty nice prime patch on the back of the card. Also, the Crawford was /249, and this is /25. It is a stickergraph, and the original subset had all on-card acetate autos, but that's really the only minor negative here.

Aesthetically, this is likely my favourite of the bunch, even when up against the final card in this post. 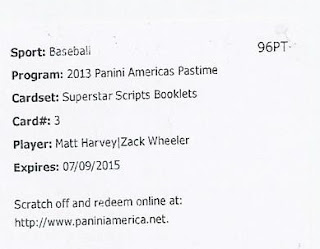 However, after almost 2 years, I assumed this card would never be made. Plus, these two never seem to be healthy simultaneously. So, it was off to replacement land for this. I said that a Bills or Raptors replacement would be fine. 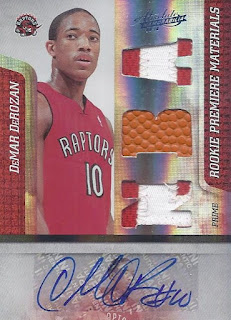 Rookie. Dual Patch. Auto. Of probably the player, since he re-signed with the team, that one would most identify as the face of the franchise. And it is numbered 2/5. I was originally thinking this might be a major drop in value from the original card, but then I saw another DeRozan from the same subset on ebay. $500 asking price. US. This is the first autograph of his in my Raptors collection, and quite a way for him to make a debut in the collection. While it was really tough to discard an item that could be a centerpiece to my Mets PC, this really took the edge off that.

And with this, right now I have zero outstanding redemptions.

From autos and patches today, back to retail tomorrow. Until then...
Posted by buckstorecards at 04:01