Or why I'll be hitting the tables at the next show to look for Brock McGinn and Dustin Brown (among others) cards. Or COMCing some goodies. 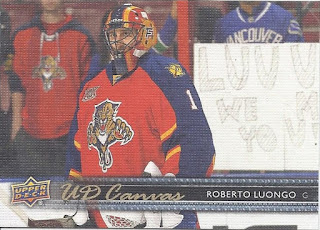 Let's start off with both an interesting mask card and an interesting picture as well. It looks like just a generic pre game photo, but the sign in the back and the jersey shows it is from the first game Luongo played against the Canucks after his trade. 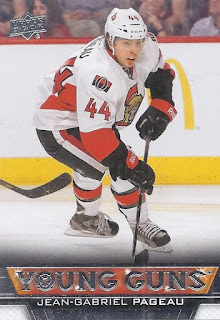 I didn't get too much UD flagship stuff in 13-14, so adding this Pageau to my Sens collection is nice. 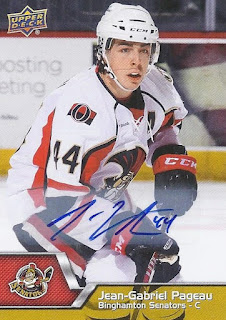 And since Pageau seemed to be the only member of the 2013-14 Senators rookie class that I didn't have a hit from. Until this AHL Binghamton Senators card showed up.

Staying with the Sens and shifting over to Rangers alumni, here are some 20th anniversary parallels. I really like the "what if" element from the Senators and Lightning cards, since they weren't around for the first set. Even the Devils give a bit of that, since they had green as their secondary colour at the time. 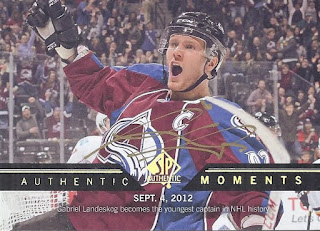 And the big one. On-card Landeskog auto! WOO-HOO! This is my 2nd auto of his in my collection, and his first solo auto. While I think I like the dual with Boedker for the connection between the two former Rangers, this is still a beauty. I almost said that this is my 1st gold pen autograph, but then I remembered I had a Mike Eagles from 94 Be a Player.

And there you have it. Hopefully, I'll be able to return fire before the Expo in November.
Posted by buckstorecards at 11:00