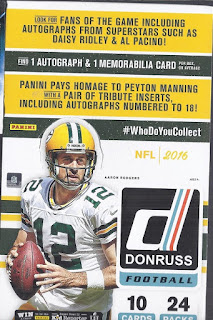 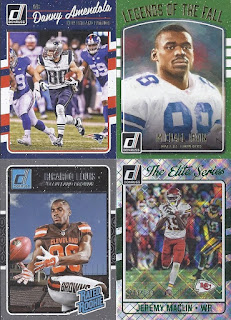 Pack 1: Danny Amendola is my first card of the box. The LotF gives a really nice portrait card vibe. As expected, the Elite Series insert are even louder in hand than in the scan. Ricardo Louis is the rookie here. 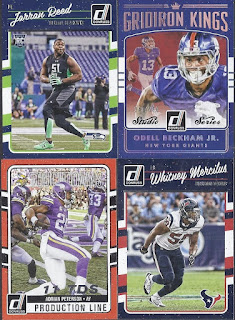 Pack 2: Not too much of note among the regular base cards. I guess I give Whitney Mercilus the nod based on the name. These Gridiron Kings parallels (Studio Series) are /250, and have more of a canvas feel to them as opposed to the regular versions. 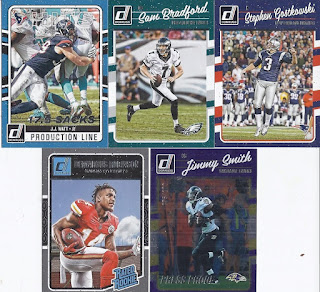 Pack 3: At about the same time I was opening this pack, the content of it became dated thanks to this Sam Bradford pull. A kicker card can always make things better, though. The Jimmy Smith is a silver parallel /100. 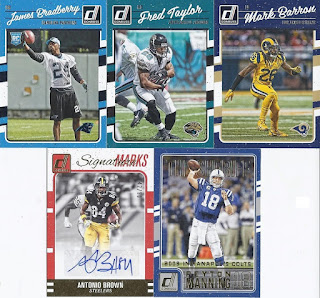 Pack 4: There's the promised autograph hit. Pulling a veteran auto is always nice from a football product, which tends to focus more on the rookies. The NFL Colour Rush uniforms raise their ugly heads on the Mark Barron card. It is nice to see that Jacksonville has been around long enough to qualify for having a retired star in their set. There are a couple interesting candidates for other teams. Eddie George is the Titans one, but they also have someone from the Oilers period grouped with the Texans in Earl Campbell. 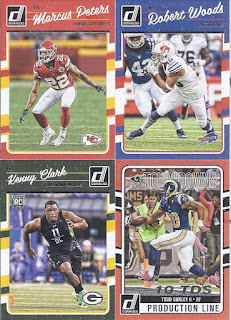 Pack 5: The Marcus Peters is an Aqueous Test parallel, appropriate for a 1990 Donruss theme. 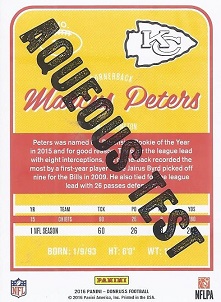 Finally, I get some Bills content in this box with Robert Woods. Other than that, the blandest pack so far. 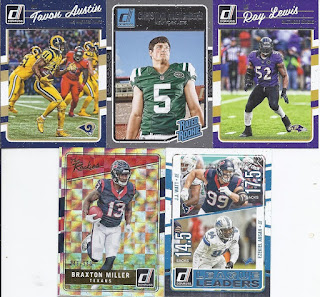 Pack 6: More Colour Rush in this pack. At least it makes things easy to determine what game these are from. But the big winner for me, naturally, is the newest 2/14 NFL binder member. Mind you, that means I still need to pick up a second card of his for that binder since this is part of the set build. Braxton Miller brings the gaudy. Ray Lewis is the Ravens legend. And there's JJ Watt's second appearance on an insert.

Kinda tough getting the auto out of the way early, but I still have a relic hit awaiting me. I think the Aqueous test parallels (if some ebay listings can be believed) are limited to /25 or fewer. So this has worked out pretty nicely as a start to the box. More tomorrow, as I hope to power my way through the box before opening kickoff on Thursday.
Posted by buckstorecards at 05:53