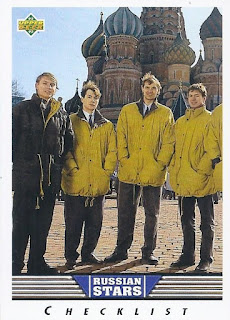 I pulled this card recently in a repack. When I got it, I briefly recapped the careers of the 4 players on the front. But, this is a checklist. What happened to all these Russian stars? 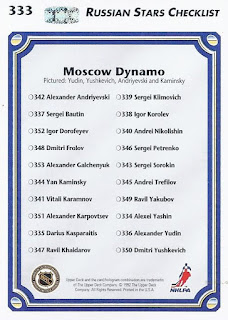 Alexei Yashin - #2 overall draft pick in 1992 by the Senators. He played in 850 games, but that wasn't the best draft class.

Darius Kasparaitis - 863 games in the NHL. He was a 1st round pick for the Islanders in 1992, 3 behind Yashin, and would also see significant time with the Penguins and Rangers.

Alexander Yudin - 3 games with the Providence Bruins was a close as he'd get to the NHL.

Sergei Bautin - Spent time with Winnipeg, then played in 1 game each for Detroit and San Jose.The third (and final) player in this subset to be selected in the first round of the 1992 draft.

Igor Korolev - Just under 800 games to his credit in the NHL, was killed in the Yaroslavl Lokomotiv plane crash, where he was an assistant coach.

Sergei Klimovich - One NHL game to his credit, seeing action in 1996-97 with the Blackhawks.

Andrei Nikolishin - Over 600 games of NHL action, mostly with Hartford and Washington.

Vitali Karamnov - Spent time with St. Louis in the early/mid 90's, before returning to Europe.

Alexander Andrievski - Another guy who played 1 game with Chicago. Unlike with Klimovich, he did get a base card out of it from Upper Deck.

Sergei Sorokin - No action over here, but he started and ended his career playing for teams called Torpedo, starting with Gorky, ending with Nizhny Novgorod. Thank you, hockeydb.com!

Yan Kaminsky - Saw time with the Jets and Islanders, before bouncing around the IHL for a few seasons.

Andrei Trefilov - Saw action with the Calgary and Buffalo, and was the Turner Cup MVP in 2000 when his Chicago Wolves won the championship.

Sergei Petrenko - Has a handful cards pictured with Buffalo, where he appeared in 14 games.

Ravil Khaidarov - Another one with no games in North America.

Dmitri Frolov - No action on this side of the Atlantic.

Ravil Yakubov - Played in the AHL with the Flames affiliate.

Dmitri Yushkevich - Played 786 games in the NHL, mostly with Philadelphia and Toronto.

Alexei Kasatonov - Was already 30 years old, and a veteran of the Central Red Army team before coming here to play for New Jersey. Was selected by Anaheim in the expansion draft.

Igor Dorofeyev - Never played in North America. His appearance here, and on the previous year's O-Pee-Chee insert set are his only cards.

Alexander Galchenyuk - Didn't really count as a Russian star for long, since he played for team Belarus after the Soviet Union dissolved. You've probably heard of his son, though. Played for the Milwaukee Admirals on this side of the Atlantic.
Posted by buckstorecards at 05:57