The rest of the package contained cards for my pre-2005 mask binder. Approximately 50 cards for that binder means way too many to show off without getting too scan heavy. So, some of my favourites get highlighted instead. 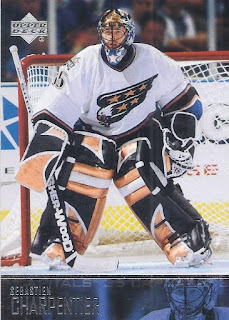 I'll open with a card of Sebastien Charpentier, who'll I'll confess never having heard of prior to getting this card. He sports a very patriotic mask, appropriate when playing in Washington. But, I like this for one other thing. The Capitol in the middle of the mask is a throwback to the Don Beaupre classic. Whether intentional or not, it is still a nice nod to the franchise's history in net. 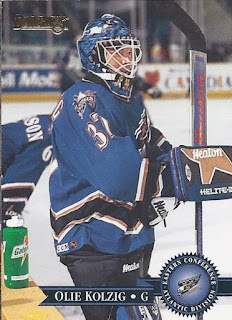 Staying in Washington, here's a familiar face in my collection. Olaf Kolzig is rocking the Godzilla mask, but that's not why he's here. It is the fact he's listed as Olie Kolzig. A quick search through COMC images makes it seem that this was a one-time thing for Donrusss. 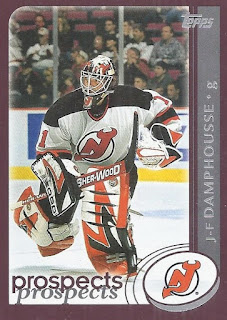 The only other player I hadn't heard of before getting the card - J.F. Damphousse. I figured that was enough to let me at least highlight his card. 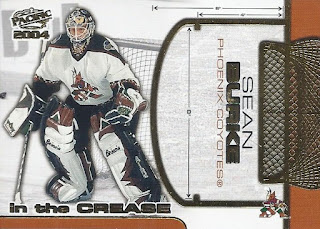 Time for a Pacific entry, and typical of their sets, it has an interesting look to it. The only way this card would be more Pacific would be if the net portion of the card used a a die-cut effect. 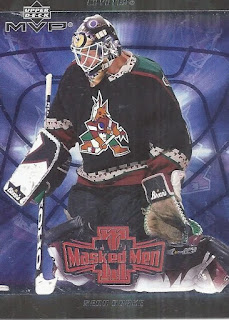 Since you really don't get that nice of a look at the mask on the Pacific card, here's a look on an MVP insert. 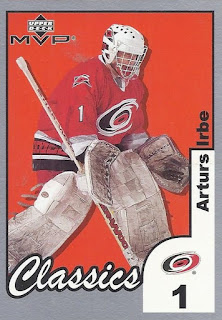 Here's another MVP insert, and boy is it red. If they were going for a retro thing with this, the look itself it isn't bad, but I probably wouldn't have it as a glossy card. 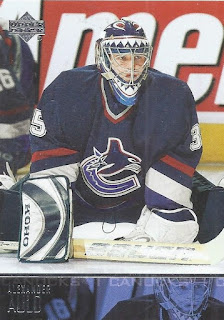 Alex Auld with the classic motif of having the creature devouring the head of the goaltender. 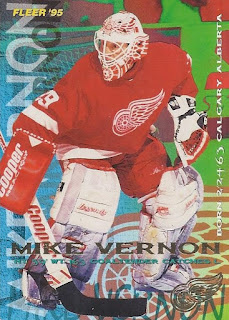 And yes, Fleer's 1995 issues were just as obnoxious outside of their baseball releases. 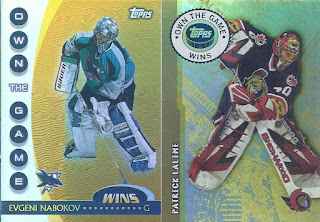 Finally, some shiny cards, and yet another chance to highlight another of my favourites, with Lalime's salute to Marvin the Martian.
Posted by buckstorecards at 08:23