Sunday Surprise Box Goodies (such as they are)

Sometimes you get binder stuff. Sometimes you get geocache swag fodder. This msot recent one, contained 2 of the former and 25+ of the latter. You can't win 'em all, but the bizarre variety of these boxes is still fun and addictive. While I've sometimes found ones where the binder rate was in the 60-70 percent range, this one wasn't close.It contained a pack of Pro Set 1991 French. An 80s pack with 3 Leafs cards (not what I wanted after last night's Sens game) and this one. 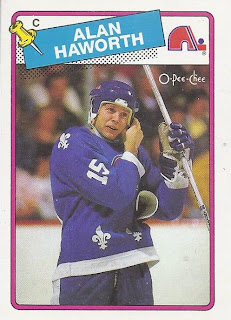 The look on his face doesn't appear to be that of a pro hockey player. It is more a mix of "What have I gotten myself into?" wonderment and complete and total fear. Yet, this one was my favourite among the box.


There were 4 hard top loaders (At least I can use those to send out some packages Tuesday when post offices reopen) and a 90s pack. While I've found plenty of junk wax in those, there were also some late 90s cards to make up for that. This one contained nothing from after 1993.

The only other contender for "best in the box"? 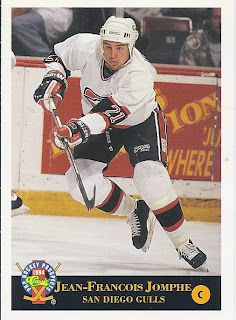 And that's only because it is a lot of fun to say "Jean Francois Jomphe".

Plus, you can google their names and find stuff like this:

Before 1 a.m., 39-year-old Aliso Viejo resident Jomphe and his pal of Dana Point. Costello, who is 10 years older, were riding in a cab that cut off a VW Jetta in the drive-through line. One of the young adults in the Jetta yelled out something that he punctuated with a certain finger.

That's when former center Jomphe is alleged to have done the equivalent of bouncing off the bench, jumping over the wall and starting a scrum. Laguna Beach Police say he went after the hand gesturer, smashing the Jetta's back window in the process. A shard is said to have injured a 20-year-old in the back seat.

Posted by buckstorecards at 13:06