Masked Mondays hits double digits! And I've got a binder worth of goodies that says it will continue well on into double digits. 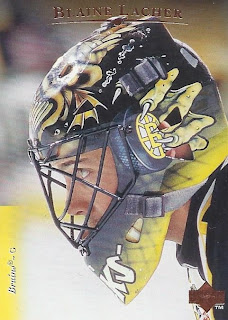 I have no idea why you would feature you own team's logo being attacked on your mask. Maybe that's why he didn't last. But you would have to admit that the "Lach Net Monster" is a truly great nickname. I'm guessing that's what the creature on the mask is supposed to be. Either that, or it is from a heavy metal album I'd never head of (which, for me, would be pretty much all of them). 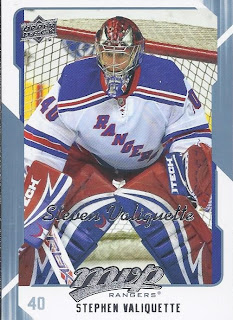 It is somewhat surprising that the best mask photo I could find on a card for Valiquette is from a lower end set. 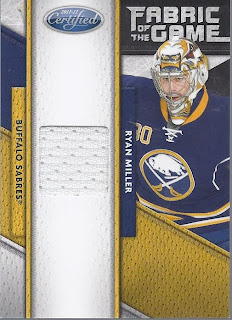 Wrapping this week's mask collection with the most recent addition to the hit pages at the front of the binder. It's a nice shot of the front of the mask, and is also numbered to /99. Ryan's masks really haven't changed that much over the past few years in terms of the design. Maybe some new paint for a slight change in the colouring, but that's about it. And that eye looks quite intimidating when put up against the Sabres colours.
Posted by buckstorecards at 10:23