When in doubt, buy a repack

After all, you're in the Dollarama anyhow to pick up chocolate bars, bubble envelopes and Easter cards. 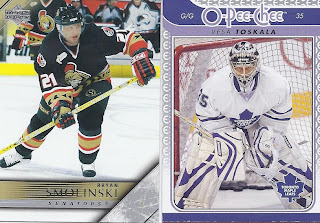 Toskala's a certainty for my mask binder, and I didn't think I had a card of Smolinski in my Senators alphabetical project. Anything else is bonus.

A trio of cards from sets you find a lot of in these repacks. I'm not scanning them. 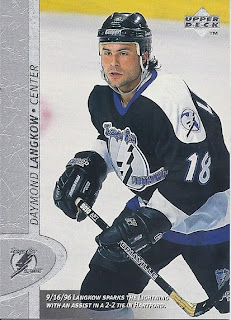 Hey, an early card of a guy who still had cards in this past season's releases! 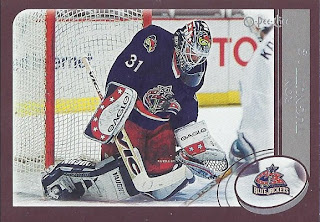 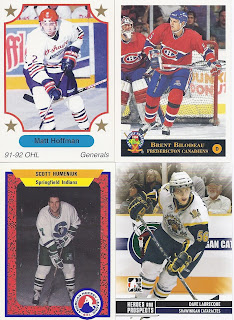 Obscure cards for obscure players are always fun to find. Total # of NHL games combined with these 4 players? Exactly the same # as I've played. Brent Bilodeau has this unflattering sentence on his wikipedia entry: " He is the only first round draftee of the 1991 draft not to have played any games in the NHL". Ouch. Yet, all 4 of these guys are certainties for the random hockey binder. 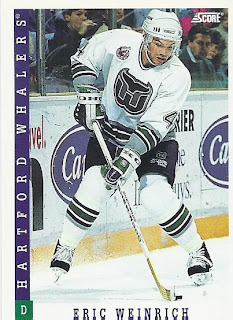 That design looks awfully familiar. I guess we didn't warrant a new look north of the border. 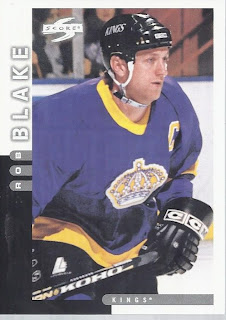 But it is nice to see design recycling works both ways. Nice to get a throwback jersey though, but I wish they'd have altered the border colours to match it. 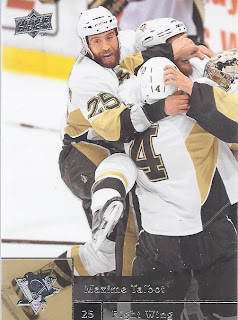 My favourite photo of the bunch. The beard seems to indicate that this celebratory photo comes from the Stanley Cup Playoffs. If it is indeed capturing the moment of victory from the Finals, then kudos for the selection.
Posted by buckstorecards at 18:21