A care package arrived from the Guilt Free Basketball Card Club this week, filled with a nice selection of Raptors, Mets and Blue Jays. Today, I'll focus on the first part of the equation.

Even with a team less than an hour's drive away, finding basketball cards in the area is a challenge. Occasionally, you can see singles at the LCS, but that's about it. Nothing at the local show, and not even that much at the Expo this past November. If I recalled correctly (always iffy with me), that's even with Jonas Valanciunas signing autographs at the show on one of the days.

I follow two teams. The Celtics, since I was a Bruins fan before the Senators came around, and figured "Hey. They play in the same city, why not cheer for them?". This was as the team imploded in the early/mid 90s. And, since they're the local guys, I also root on the Raptors. And my two team hockey/hoops loyalty has stayed with me to date. So, I elected for the local guys in this, since I knew there wouldn't be too much demand for them. I shipped some Cardinals (with an emphasis on the O-Pee-Chee versions) and some Blazers west, and the cards arrived this past week.

On the whole, it was kinda depressing though to look through the cards and realize that only a small number of guys are still on the Raptors organization. But, basketball cards tend to have great action photos on them, so even former Raptors will be binder contenders. 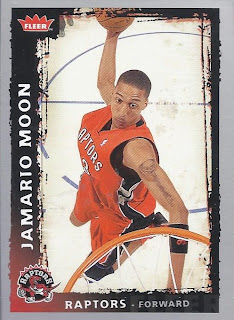 I'll lead off with one of my favourite former Raptors.. How can you not love anybody for whom their journey to the NBA included a stint with the Harlem Globetrotters? 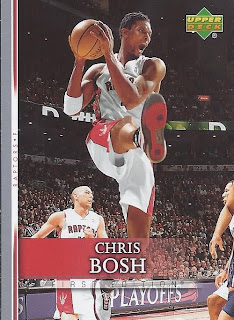 I'll never get why the boo-birds come out for Bosh when he returns here. He left the team to win a championship. After all that time on some dreadful teams, who can blame him. He didn't leave like Vince Carter did, with whining to management about everything. Sure, boo him as an opposition, but as a player? I don't get it. How can anybody hate a player who did this?
As for the card, there were about a half dozen Bosh cards in the pack, but the one I scanned for posting was my favourite due to the look on Chris' face.

Now, let's look at the current guys. Of the roster now, DeMar DeRozan is by far my favourite player. 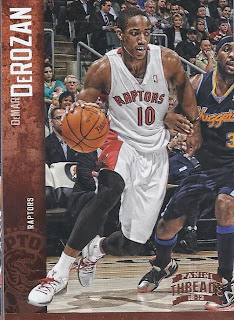 It's the back story that makes me love him. Coming out of college early for the money is nothing new, but to do it so he can help his mother dealing with lupus is just an amazing story. 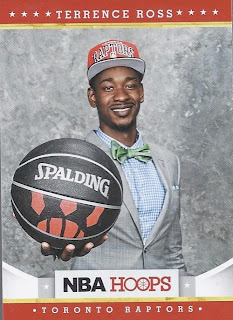 Although he can't make the bow-tie work (and really, not too many people can) it's nice to wrap it up with a guy on the team, and the reigning Dunk champion.

Thanks for the Raptors memories, both good and not-so-good. I'll go the baseball stuff tomorrow.
Posted by buckstorecards at 07:50

Email ThisBlogThis!Share to TwitterShare to FacebookShare to Pinterest
Labels: basketball