Catching up on card show hits

It has been about a month since I welcomed these hits into the binders. I might as well finally get to posting them. I pulled all of these from a $2.00 bin. Some I've already sent out to traders. Some are already in binders. But there were a handful I didn't get around to posting yet. Time to fix that. For reasons I have yet to figure out, I'm posting these in order of card thickness. 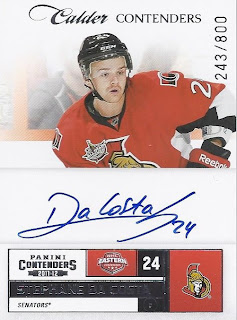 A nice rookie autograph from the Sens system. With all the injuries in Ottawa, he's been bouncing back and forth between the Senators in Ottawa and Binghamton, and putting up decent numbers in the process. And he's the only person to make the NHL that was born in Paris, France. That's 3 fewer than were born in Paris, Ontario. 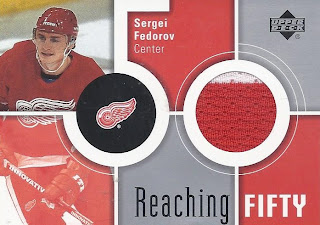 I'm not a big Wings fan, but it is really hard to turn down a two-colour swatch of someone who is practically a lock for the Hall of Fame. And for a mere toonie? 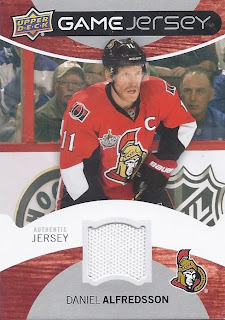 A relic card of my current favourite player for 2 dollars. How can I refuse? 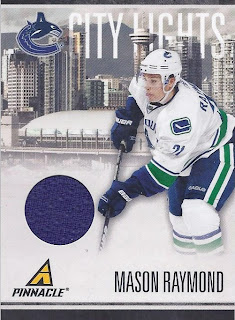 This is my strangest pick of the day, but I've always liked the design of the City Lights relic. The back tells something about the player's home city as opposed to the player. There's my love for 1993 Leaf shining through again. 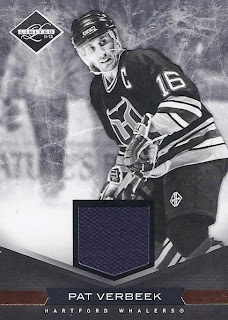 I know there's a good # of folks out there who still love and remember the Whalers. If it isn't wanted by someone out there it will still look good in my hits binder. A nice little relic (out of 99) for a defunct team. I just wish it was a classic Whalers green swatch. If then, I'd most certainly be keeping it instead of maybe trading it.
Posted by buckstorecards at 12:36