Trading with the Angels in Order

Another onslaught of cards in return for those sent out during the aftermath of my jumbo box break. For a Mike Trout Chasing insert, and some random other Angels I had around, these are some of the goodies I got in return. 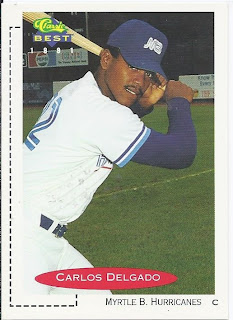 The highlight of the package was this. This is now the earliest Carlos Delgado card in my collection. This is a really great addition to my Delgado binder. But that wasn't all the Carlos cards that were in the package: 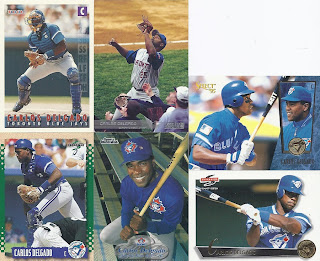 I still don't think I've posted half of the Delgados that were in the envelope. I love each and every card I get of Delgado when he's still in the catching gear, and the photo up against the fans is a great ones. I can't figure out why I like cards so much feature slugger-type players playing defense.

There were other Blue Jays as well, mostly of the Kaybee/Kmart variety. I particularly liked the former, since  I don't thing Kaybee ever had any stores in Canada. Bonus for the classic blue Blue Jays road uniforms.

But there were Mets as well: 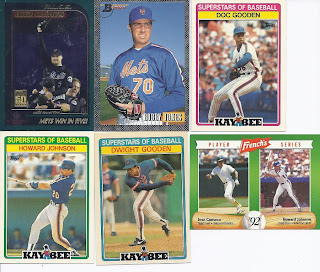 Again, just a teasing of some of them. A nice variety stretching from the licensed to the very much not licensed.

Awesome, goodies! I'll have to keep an eye out for some Salmon dime box goodies when I'm at the Expo in May.
Posted by buckstorecards at 16:44