These cards came in last week - and I'm getting to them now. There wre a bunch of 2007 product in it - Masterpieces, Bowman, Heritage,Turkey Red and Artifacts.My continued promptness astounds me. I also sent a pile of 80s Topps cards in a trade, so I'll get to that element tomorrow. I picked the Jays in the break, and got randomed the Rangers, Padres and Marlins. Let's see what comes up. 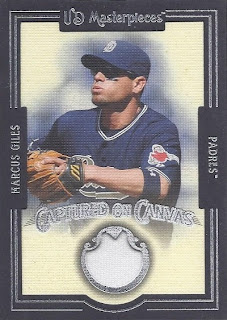 This was the only hit I got. Although if I could pick a product to get the hit from - Masterpieces would be it. I'm a sucker for any type of painted card.  The player is incidental to the card.

Despite the lack of hits, I did end up with a nice trio of numbered cards. 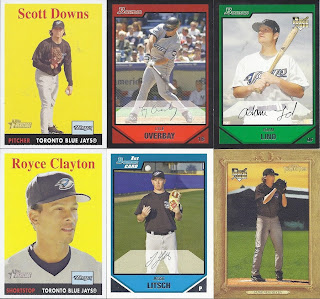 The Jays brought a nice variety of cards in. The bottom row features 3 cards I needed players of for my alphabetical Jays binder, even though Jamie Vermilyea's time with Toronto (and in the majors) consisted of  only 6 more innings than I pitched in my career. Despite his struggles the past couple years, it's hard for me to dislike a Lind rookie.

I think I barely broke double digits in terms of Rangers cards. The highlight for them was this base card of Michael Young. 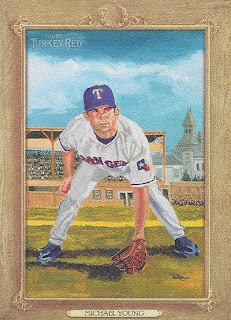 San Diego did a little better for me. A nice mix here.

I love the Masterpieces card. Cla Meredith is yet another name that makes me think of a MST3K riff. "What sort of name is Gulager?" in reference to Clu Gulager, and the fact that they thought his name during a previous episode was Gallagher. Will anybody ever be placed on Cla Meredith alert?

Wrapping it up with a pair of Masterpieces surrounding another awesome name - Taylor Tankersley. It just seems like a name for the latest talent to show up on WWE NXT to be given.

Posted by buckstorecards at 17:30