Wrapping up the shortest month with another pile of zistle goodies. This time, I sent off a box full of early 90s Score/Donruss and Topps in exchange for some more cards from my wantlist for my personal collections. It was more of a "I'm cleaning this stuff out" trade, so I was happy to unload piles (as in over 300 cards) to a set builder in return for a little more than 20 cards. 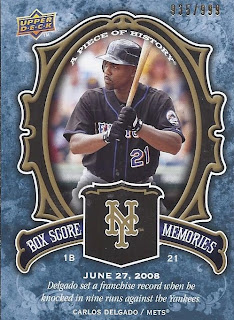 This was the closest thing to a hit that I got in return, although I would have wanted this one even if there weren't a number on the top. My favourite player ever, on my favourite team, putting up a record day against my least favourite team. What more could one ask for from a piece of cardboard? 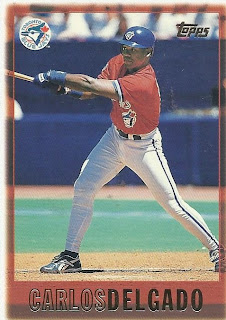 How about my favourite player, on my second favourite team, rocking the Canada Day red jersey? The red border is really strong on this card, although it really doesn't work for the rest of the team cards. 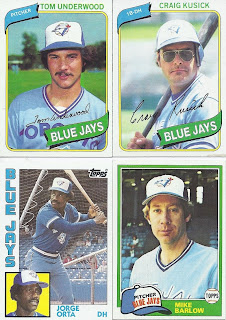 Some more Blue Jays for my project of acquiring one card of each Blue Jay, in a Jays uniform who had at least one card from a major company. Of these 4, Orta is the only one I had any memories of. 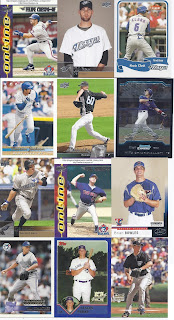 And here's a dozen more for that box. I remember a few guys from this grouping, such as Inglett, Ray, Clark and Jackson. Randy Wells, however, had only one Jay game to his credit. That's one more than Beam, Perry or Chiaravalloti picked up. The latter never made it above AA level, but he might have the most Italian name imaginable. While I'm not actively pursuing players who never officially suited up officially for my collection, I'm still going to keep them in the box and soon to be binder. Why? Why not? 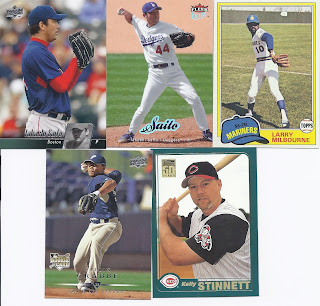 I've really wanted the '81 Milbourne for a bit. I love the design from that year, as well as classic Mariners look.
Posted by buckstorecards at 15:09