With the arrival of both blog trades, zistle trades, ebay stuff, listia stuff and group break stuff over the past week or so, the poor mailman is getting hunchbacked again. And I've got a bunch of posting to do. I'm going to start with the smallest zistle of the two. I sent off some mid 90s Griffey cards, and some Pujols stuff from group breaks, in return, this came my way: 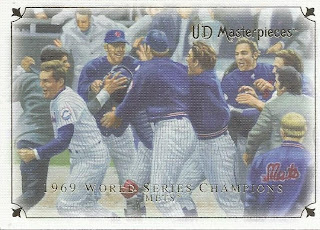 It's really hard for me to turn down Miracle Mets anything, especially a Masterpieces card. This is another card that I was certain I had - guess not until yesterday. 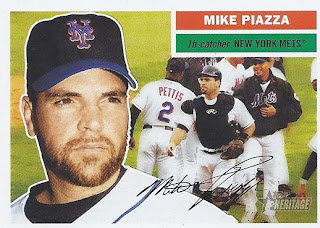 Heritage Mike Piazza cards are another thing I  really have a hard time turning down. Plus, there's a bonus of having a slightly different position for a Piazza card - 1b-catcher. 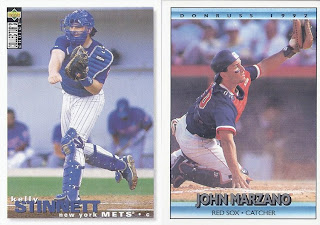 Another two cards for the 2-14 binder. 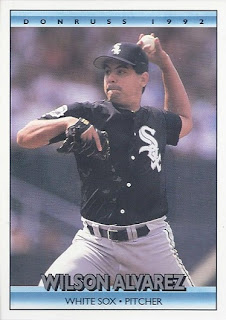 Why this one? It really doesn't fit into any of my collections. On the surface. But you need to flip it over and look at the stats to see why I picked up this one. 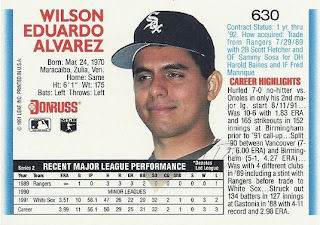 Take a look at the ERA for the 1989 season. The old ∞ symbol. 5 batters faced with none retired. That was his first game. Second game = no hitter. A wee bit of an improvement, but I just needed this card for the oddness. It only seems to be his Donruss/Leaf cards that had that feature. The other releases had stuff like "---" or "0.00".

Wrapping things up, I'm currently on a mission to acquire an alphabetical collection of Blue Jays cards. From Accardo to Zosky. Here were 9 new additions to that mission: 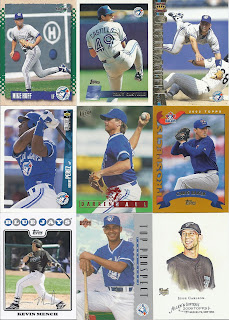 There are a couple guys who had a few years in Toronto that I completely forget about - namely Huff and Castillo. Castillo was the guy who got the win in the 15-14 debacle back in the '93 World Series. Why is it that I can remember Willie Canate from that team, but not Castillo? Go figure.
Posted by buckstorecards at 17:39