Happy Birthday to me, and these fine folk!

I guess today (It is 2/14 in Newfoundland when I post this, that's enough form me) is as good a day as any to go through my 2/14 binder and highlight some of my favourite pieces of cardboard within. If not for the connection, it would be the most random sportscard binder in the world. No two cards of the same player on the same page. I only allow for two cards from the same set if the players are teammates. Of which I've found two. Jim Kelly & Lonnie Johnson with the Bills, and Scott Scudder and Keith Brown with the Reds.

I've yet to line up two of the former, but two of the latter will show up later.

Firstly, my favourite photograph of the bunch. Who would believe it is actually a card from the junk wax era? 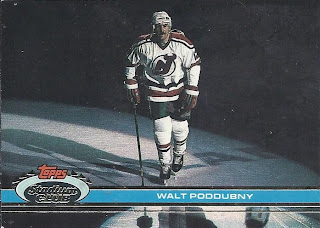 This spotlight photo from New Jersey takes it narrowly over a Kelly Stinnett that I picked up in a trade w/ Nick @ Dime Boxes. 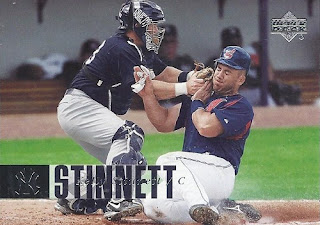 A great action shot of an Indian getting a face full of glove in spring training. It's close, but the Walt card gets it for being a unique shot for the time.

The oldest card in the binder is this one that I picked up from sportlots, with the mail arriving just in time, about a week ago. 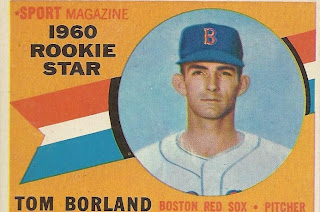 I've got a page of relics so far in the binder. It was nice to pick up the Kozlov for under $2 on COMC, and I grabbed the Gaborik (my pick for the best hockey player from 2/14) this past weekend for a toonie. At least in a hockey nation, it's good that I don't match up with the major names. 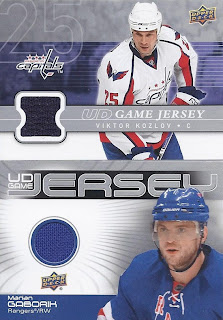 And I decided to celebrate a little early, picking up this beauty from ebay. Hopefully on its way from Latvia as I write this. I guess my desire for this card, and to pay shipping on the card, makes me more obsessed with cards of Viktor Kozlov than any reasonable person should be. 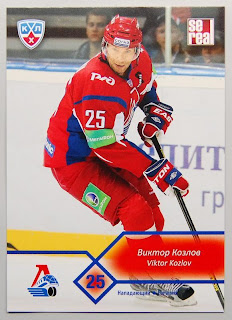 When I looked through the list of football players, it was this guy who came up with the most games played. Sadly, since he was an OL, he doesn't even strike double digits in terms of different cards. At least he does have a Super Bowl ring. 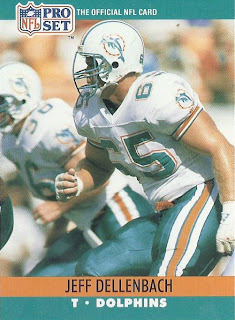 I could even have David Garrard or Patrick Ramsey backing up this group.

My basketball collection is the most threadbare of the album, but my resolution is to change that. At least I have a good selection of cards to pick from for these folks, especially Richard Hamilton.

Needless to say, hockey is the biggest part of the box. I had trouble narrowing the remaining unscanned cards down to just 3. I narrowed it down to a great mullet, the oldest hockey card in the binder, and a player I was looking for, until I finally found a card of his staring at me from the front of a repack. Woo-hoo! Come to me!

These are the only two cards that are from the same set that share a page in the binder. A pair of Reds in beight yellow. 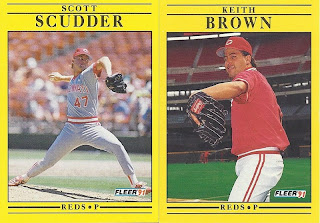 And to wrap it up,  3 more baseball. The guy who is probably the most famous of the 2/14 baseball players, the second guy, alongside Viktor Kozlov that blow out the same # of candles as me on 2/14, and one from this year's flagship.

And now, with all this scanning, posting and typing, I'm taking my birthday proper off from blogging. With my mailbag the past two days bringing in draft and group break cards, I'll have plenty of goodies to show off.
Posted by buckstorecards at 19:31