A new Dollarama opened in town. Of course, for me that means I have to raid it and get some cheap box busting fun. $8.00 means 4 boxes worth of fun.

After busting the Jumbo box earlier this week, it is nice to return to cheap stuff. 2 boxes today. 2 more boxes sometime next week. Let's go. 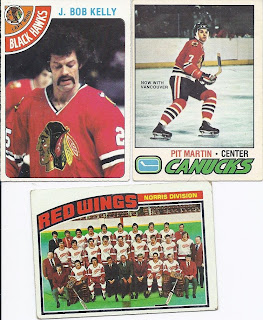 First up was something I hadn't seen in a many a month. A 70s pack, consisting of 3 cards from the 70s. Kelly's mustache and white guy 'fro combine for awesomeness. The Wings cards is a checklist, and I admit to being surprised it was unchecked. Pit Martin? How can I hate a card of a guy named Pit? I've already got my money's worth. Beckett value? Who cares? 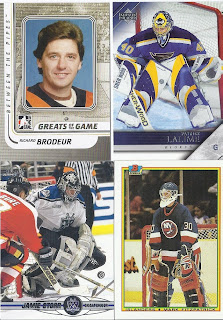 If it's a goalie pack, it has to include that Fitzpatrick card. If someone claims the Islanders box, they'll get about 10 of them. I'm always happy to add Lalime and his Marvin the Martian mask to the mask binder. Jamie Storr will probably get in as well. 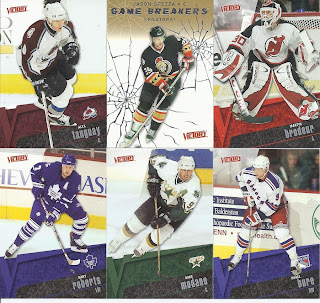 A pack of Victory was in there as well. Naturally, for me, the Spezza insert was the highlight here.  But, getting a Bure from his Rangers days is a nice addition for the misc. binder. 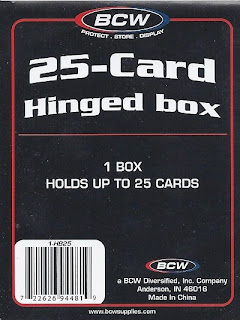 I think this is the fewest cards I've ever pulled from one of these. But there are enough binder candidates to keep me from getting upset about that. 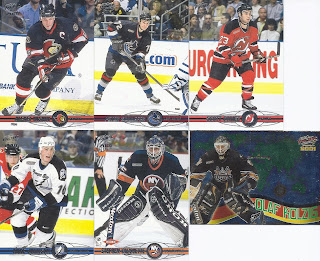 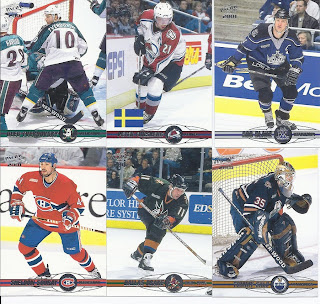 A 12 pack of Pacific cards start it off. The Kolzig insert is apparently 1:37 pack pull. Nice enough, and I always like adding Godzilla cards to the mask binder. Valiquette and Salo will also make it in. I also think the back shot of Oleg will join the misc. binder. Getting 4 keepers out of 12 isn't bad at all. 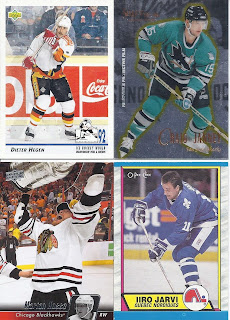 A 5 card hall of fame pack was next. I think all 4 of these cards are keepers. Hegen's card is his only one of this side of the Atlantic, as far as I can tell. Iiro didn't have many others. The Hossa card is just a tremendous photo. I'll never get tired of Stanley Cup lifts on cards. The Janney is plenty shiny.

And my Guaranteed HOFer? 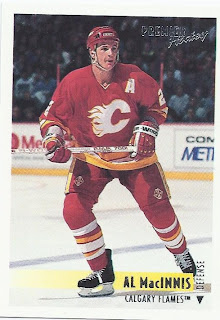 I don't have this Al MacInnis card! Great! 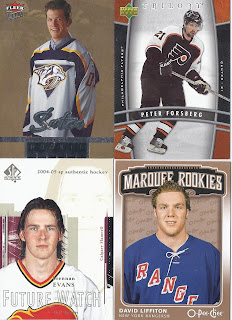 An Investment Pack. 4 cards with a guaranteed $5.00 value. I'm guessing most of it is in the Suter parallel. The lower two only have a handful of cards, all with photos that seemed to be from the same photoshoot. 9 total games among them. 7 for Liffiton and 2 playoff games for Evans. Obscure players are always welcome. 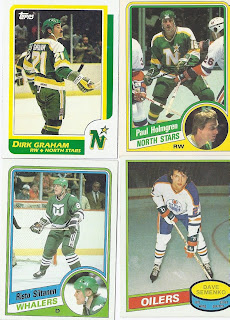 4 80's cards wrap this one up. All I have to say about this is CEMENTHEAD! Hell yeah! A rookie card of a decent player in Dirk Graham is a distant second in this one.

Lots of keepers in this box. Looks like at least 14 that will head off into binders. That's more than the total cards in the first box.  Box 2 easily wins this war, but it really isn't fair to battle among packs/boxes where the numbers aren't even.

2 more boxes tomorrow. Or whenever.
Posted by buckstorecards at 17:13