Goodies from Too Many Verlanders/Manninghams Day 1

A nice bubble envelope arrived at Chez Me yesterday, filled with the return portion that sent a pile of Michigan alum, a couple Jack Johnson relics and a handful of Tigers/Wings stateside. It was full of enough goodies that I can spread the posting out over a couple of days. Tomorrow, the hits, but today the base cards and inserts. 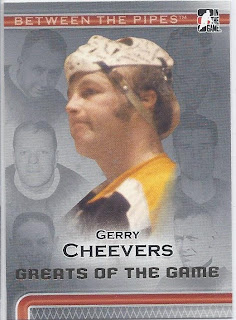 The first of three cards to disappear from my top 10 wantlist was this Cheevers Between the Pipes card, which will be on its way into the mask binder. I've already for a few cards of his mask, and the salute to the mask via Steve Shields, but I wanted this one for the fact that the back of the card tells the story of the mask. Namely, a stitch was painted on the mask for every place he was hit by a puck. 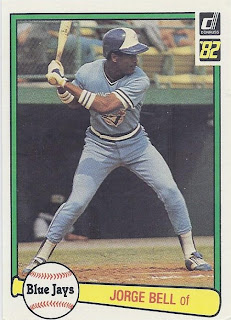 Also disappearing from the wantlist - this 1982 George Bell rookie card. This was the only one I needed of his 3 1982 cards. And it is my favourite photo of the 3.

I haven't counted player-by-player in the ol' mask binder. But if I did, I'm certain Rick DiPietro would be up there with the leaders. I'm not the biggest fan of his, but his star-spangled theme masks are always detailed and stand out. Here's another one for the collection. 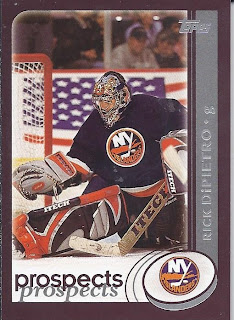 Also making its way into the binder, this coin card of Cujo. 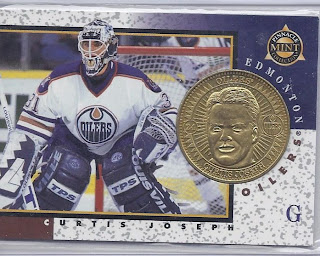 If only the coin had the mask as well. That's it for the players who only made one appearance. However, there were two players from my personal collections who made multiple appearances in the package. Firstly, lots of Vlad! 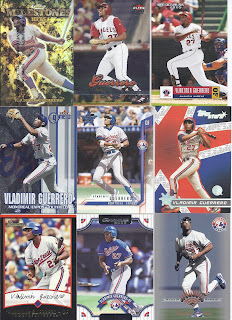 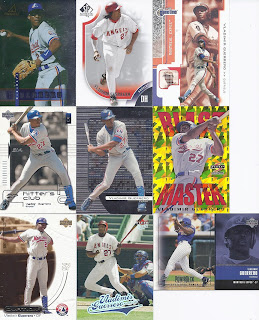 The shiny Blast Master card is really nice, but my I defer to my preferences for my favourite, and select a Diamond King. 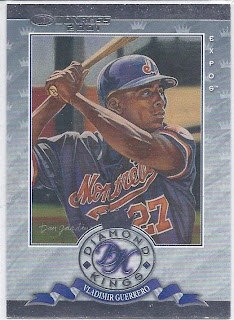 Although it is kinda depressing that there isn't a home uniform to be found anywhere among his Expos cards.

Also in the batch was a nice handful of Delgado cards, all of which were on my way to the binder. 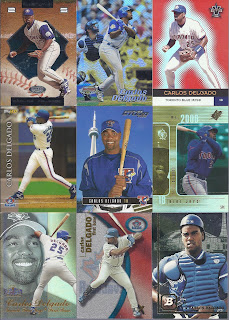 Much as I loved the ones with the Dome/CN Tower in the background, my favourite was the third to come off my top 10 list. 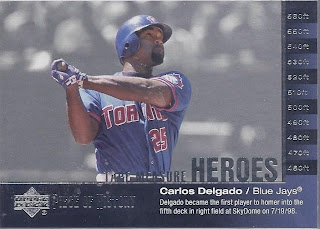 A card commemorating his mammoth home run to the upper reaches of the Dome. Sweet.

But now I have to rebuild my list. And it makes me certainly the only person on the planet to have a  Bill Risley card among his 10 most wanted.

Cheers for the great trade, TMM/TMV, but only partial cheers with the rest coming tomorrow as I get to the hits.
Posted by buckstorecards at 09:43