Back when I busted my box of 2013 Topps, I came across a /99 Josh Hamilton coin. I offered it on the blog, and then put it on ebay, and recovered the taxes and part of my shipping on the box. Or the shipping and part of my taxes, depending on how you look at things.

So, like any sane person would do, I turned right around and hit ebay to get some more cards. For the most part, I was interested in chasing down some of the more interesting autographs in the ITG Enforcers set. I had my eyes set on 4, and of those I got 3, only missing out on a Tony Twist. 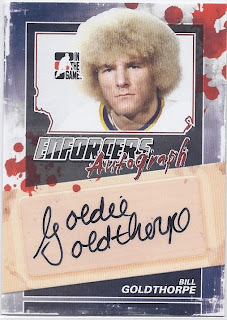 One of hockey's legendary madmen! Since he never played a regular season game in the NHL, there's no way you could get something as great as this from a licensed product. Plus we have a killer white guy afro to go alongside a clear, unique signature. I'm really happy to welcome this one into my collection. 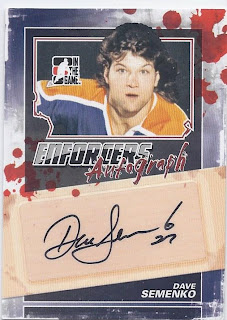 Not nearly as legible a signature. But when I was able to combine this one with the Goldthorpe for only $2.25 more, it was an easy decision. How can I turn down an auto of Cementhead himself? 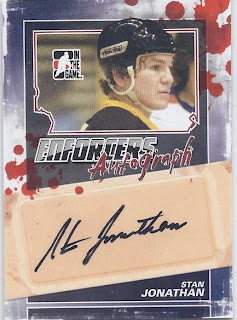 This was the third auto I picked up. This will join the Terry O'Reilly I picked up in a group break as a logical pairing of Big, Bad, Bruins. I would have considered adding a John Wensick to the mix for a row of chaos in my binders, but he's obviously not pictured in a B's uniform on the card. But these two go good together.

At this point, I was looking to get a few more cards in order to combine shipping. The following cards total up to a whopping $3.70. 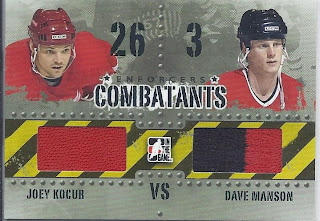 I really, really wanted the Manson two-colour swatch. This was the most expensive of the bunch, going for $1.70. Kocur is a nice pairing as well. Another pair of infamous tough guys. 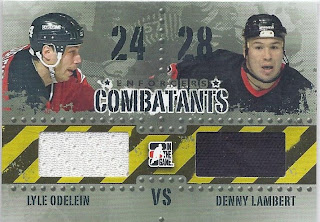 Lambert is a Sen here. That's why shelling out $1.00 for this double swatch was an easy decision. 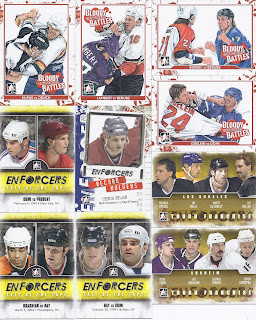 Finally, I also grabbed 10 base cards for a dollar. The only one I really wanted was the Nilan, but the rest look pretty nice grouped together on a page. Total outlay for the past 4 entries, including shipping, didn't reach the $10.00 mark. No complaints here.

Finally, one more. This didn't isn't part of the Hamilton turnaround, but it is one I had to have for the obscurity page in my 2/14 binder. 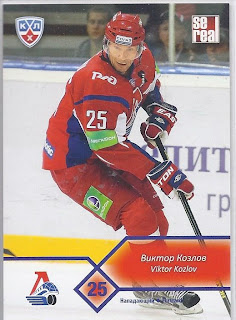 I had to order this one from Latvia. That's a first for me. Yet another one of a guy I collect that I'm sure nobody else does. Interesting to see that he's now playing for Lokomotiv Yaroslavl.


Posted by buckstorecards at 16:15