One of the things I like about the mask binder is the variety of players contained within. I've got Hall of Famers. I've got Between the Pipes cards of guys who never even played a game in the NHL. Sometimes even on the same page. Today, three cards of players who have had very short-lived NHL careers to date. 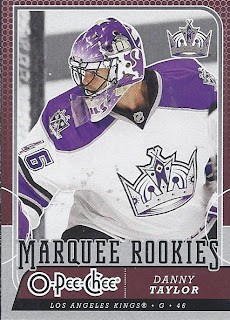 It's a nice mask that uses the royal designs that are appropriate for someone with the Kings. Danny played a grand total of 1 game for the Kings, and then has spent the past few years on a nomadic journey around the game. Including a stop with the awesomely-named Hamburg Freezers. However, he's made his way back to the NHL, and will make the start tonight for the Flames against the Coyotes. If I hadn't thrown in this card with a COMC order, since I had just "0.xx" remaining on credit, I probably wouldn't have paid enough attention to the transaction ticker to note that he was being called up from Abbotsford. My reaction when I saw that: "It couldn't be that guy. The one with a grand total of 1 game in 07-08 to his credit. It is? Cool!" That's why I included the "to date" in the opening paragraph. 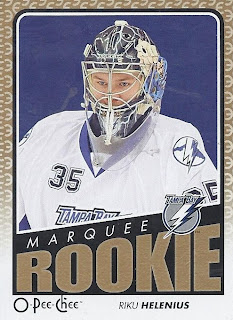 Another guy with 1 NHL game under his credit, but, much like Taylor, might return to the NHL sometime soon. He returned to Finland, but was brought back to this side of the pond where he's now playing in Syracuse. The lightning is obligatory for a Tampa mask, but what might be best is what is on the other side of the mask. He had the Superman 'S' there. 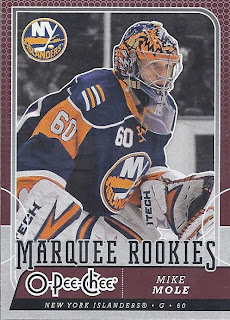 Mike Mole was a contestant on the reality show "Making the Cut", and it earned a contract with the Sens. He then moved on to the Islanders, where his total NHL experience consisted of being a backup and not seeing any ice time at all. Either he's now working as a representative for Reebok, or someone with the same name has a twitter account that implies that. Sadly, this paragraph about him is longer than his entire wikipedia page. It is still a great mask though. The Isles colours actually work well for the creature motif that is seen on many masks.
Posted by buckstorecards at 11:02