His position is WHAT?!

Last year, I added the 1975 Herb Washington card with the position of "Pinch Runner" into my collection. It's the only card ever issued with that designation.

Over the weekend, I was looking through drawers and I came across this card. 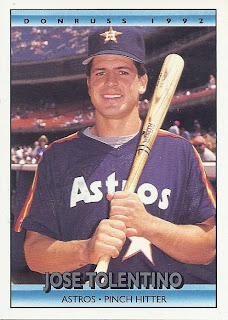 Yup. That's a position of pinch hitter listed on this 1992 Donruss Jose Tolentino.  As best as my googling can tell me, there isn't any other card with that position listed. The closest I could find was a card that proclaimed Candy Maldonado as the Pinch Hitter of the year, but that's it.

When one looks at Jose's baseball reference page, he's also listed as a pinch hitter there, as well as a first baseman. His 1991 debut (his only season) was as a 30 year old rookie. His only big league cards were this one and his 1992 Topps ones. And he's still in baseball as a broadcaster.

I'm probably the only person on the planet that considers this card worthy of a hard toploader, but it will go nicely beside the Herb Washington in the box.
Posted by buckstorecards at 14:47