Today, three cards that weren't in my binder as of yesterday. Two were found in a search through poorly organized boxes. The other was sticking out front in a repack. They'll be added in once I have enough to fill a sheet.

And away we go! 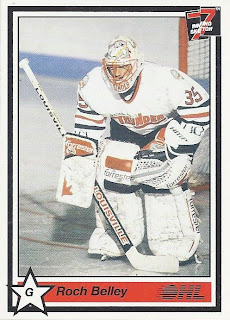 Leading off with an OHL card from 1990? Sure thing! Roch's mask isn't the most spectacular, but anything beyond basic masks at the time was considered impressive. It's just a simple logo on the forehead with the team name on the chin. But it is something different. Plus, the guy's named Roch Belley. Sounds like the name of an opening match wrestler in Memphis circa 1992. Roch was a late round pick of the Blackhawks, but never played a game in the NHL. 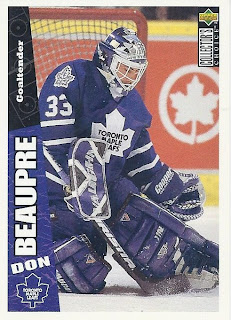 Yes. It's a Leafs mask. But it is hard to hate a mask with a nod to history on it. In this case, a view of the Carlton Street cashbox on it. Andrew Raycroft would go for an MLG themed mask over a decade later. I'd still choose Beaupre, though, since he's a local guy.

Both these two showed up in a box I'd searched through many times before. I have no idea how I didn't notice and pull them into binder status until the weekend. Better late than never.

This was the one that I saw in the front of a Dollarama re-pack: 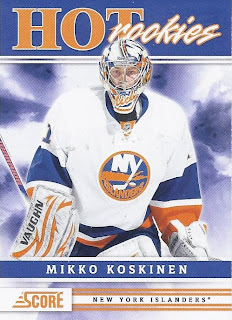 As I showed last week, I love mask cards of guys with brief NHL careers. Mikko Koskinen played 4 games with Islanders, and has since returned back to Finland to play. A nice wraparound usage of the Islanders logo in this mask.

And since it was a repack, I'll share some more interesting cards with you. A retro jersey. The Tasmanian Devil (this card was visible on the other side of the repack and a card that shows that the interesting Fleer 95 design wasn't limited to just baseball cards.

Posted by buckstorecards at 16:06