On to the rest of the goodies. While I pulled some nice inserts in the first 5 packs, I didn't get too much that fit into my collections. Although I was able to go through a complete base set, which is the really important thing. 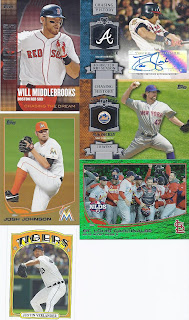 David Justice as the autograph? Not bad at all. Finally, a Mets card in the insert, and it is the guy I was really wanting to pull. His stuff won't be cheap locally. Another guy who I'm sure will be photochopped into a Jays uniform as the sets progress throughout the season. I'll take him as a /2013 Marlin, though. 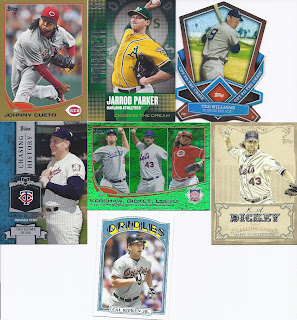 And the Dickey inserts keep on coming. 1 and a third worth here. A nice variety on the legends inserts as well. I confess that I spent a lot of time looking at the 2 R.A. cards to see if Topps used the same photo for both. I don't think they did, but it is really tough to tell. 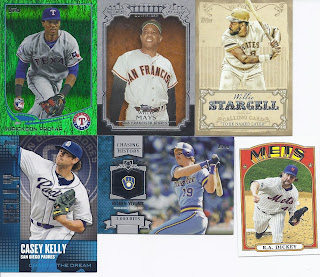 3 straight packs with R.A. inserts! It's a Dickey hot box! That sounded wrong. Really wrong. Profar's a nice pull for an emerald parallel as well. 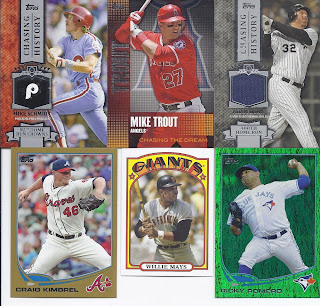 I leave the back-to-back-to-back R.A. cards and replace it with back-to-back Willie Mays inserts. My first actual Blue Jays insert/parallel and it is of the likely #5 starter in the upcoming season. I finally find the relic in the box. Adam Dunn? It's OK, but there's no way that's a recent one. Unless the White Sox wore blue at some point and I missed it. 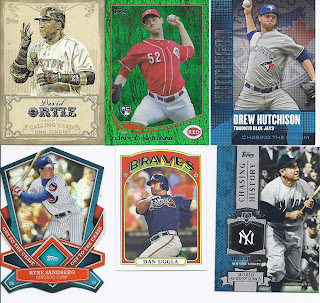 It's my first Yankee legend insert. It's nice that it isn't one of the usual suspects that seem to show up in these, such as Ruth, DiMaggio or Mantle. It's someone with ties to the Mets, and an interesting quote machine. Plus another card for my Blue Jays binder.

Note: The Profar, the Trout, today's Mays cards, the Williams die-cut, the Ripken mini, and the Middlebrooks are claimed already.
Posted by buckstorecards at 07:36