Not your Average group break

Way back when in January, I participated in a group break over at Joe Average Card Collector. The cards rolled in about a week and a half back, and I'm finally getting around to putting the cards up here. Punctuality is for the weak!

As usual, I grabbed the Mets and Blue Jays. I had a third team coming, and elected to grab the Twins to round out the 3 teams. The boxes included were 2003 Topps Total, 2002 Stadium Club/Topps Series 2/UD Rookie Update and 2000 Stars.

Let's look through some of the goodies.

My favourite photo in the bunch, surprisingly comes from the Topps Total box. A nice defensive photo from O-Dog. 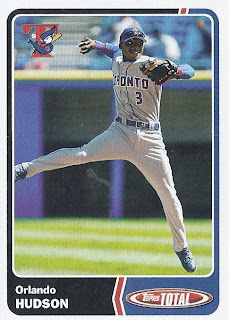 With an honourable mention to Super Joe, also from Total.  In a break that included Stadium Club, that's a surprise. 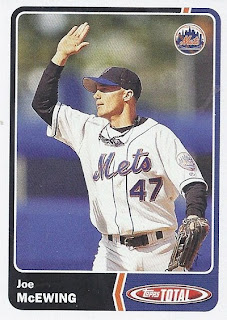 Staying with Topps Total, the best thing about the cards is getting cards of people that only had a cup of coffee with the Mets, if that. If I was more of a "get every Met" type, I'd be interested in that. Otherwise, just some more neat cards for the Mets binder. 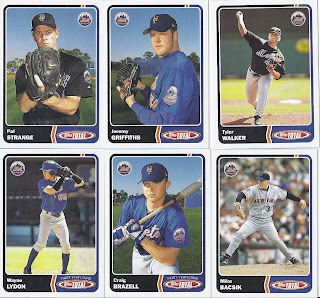 OK. One last Topps Total. This time, a Jay. One that made stops on both my favourite teams, and is now the pitching coach in Toronto. And it is a parallel too! WOO-HOO! 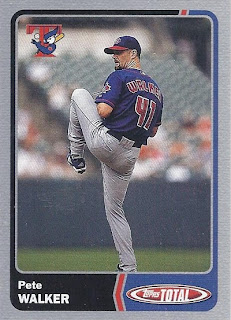 Staying with Blue Jays, I also got three new additions to my Delgado binder. The Reel Time one is a really nice, thick insert card.

Getting back to players I didn't remember, I actually did recall most of the Jays cards, except for a Jason Dubois. This guy stumped me and as best as I could google my way to, he never pitched an inning in the bigs. 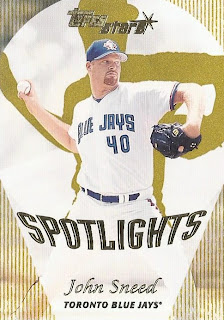 I should probably post at least one of the 2002 Topps cards. And since I am doing so, why not post a Twin, and the biggest base card I got from the break, a nice rookie card of Joe Mauer. 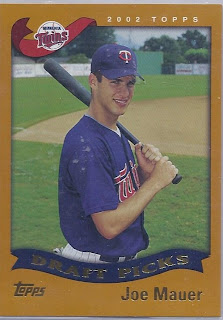 Definitely not a bad card for taking a flyer on the Twins. But there was a hit that awaited me in the boxes: 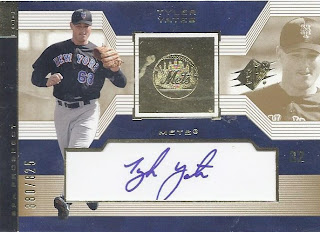 Tyler Yates only spent one year with the Mets, but he does have a nice, interpretable signature, and I believe this was the only autograph pulled in the break. I'm still quite happy with it for the obscurity of it all.

To top it all off, there were some random Jays and Mets added to the pack. Usually, I'd have a hard time voting against a Sportflics card as my favourite, but the oddball factor pushes this one over the top. 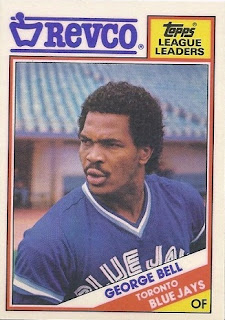 A great way to wrap up this break. Thanks for the fun!

Posted by buckstorecards at 09:32