A few goodies came in the mailbox today. A trade package from plain gray swatch, a PWE from the Toddfather and a bubble envelope from Topps. I waited until the last possible hour to decide to get my die-cut golden moments shipped. 1 card, and they shipped in a bubble envelope. With postage at at least twice what I paid for the shipping. No complaints about that.

So, what was the only card I managed to unlock? 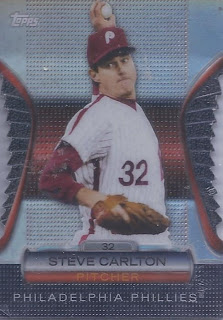 Nice. Of course, if someone would has a Joey Bats or a Vlad Guerrero and would rather have this, I'm open to listening. The protective film couldn't have been on too tightly in the first place, as when I removed the card from the hard top loader, it practically came off on its own.

The PGS package is too big to post in combination with another shipment, but it will fit nicely on its own either tomorrow or Thursday. But the Toddfather's PWE goodies will fit nicely. I sent a couple inserts from the 2013 set, as well as a few 2012 set builders.

This was the highlight of the envelope. 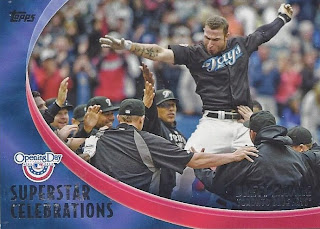 This has been on my zistle wantlist for a long while. A great, great photo and it is finally nice to put it into my Jays collection. That's not all that made their way into that, though.

The Williams card is definitely a different photo, but I'm happiest to welcome in the Fausto Solano. Although he never saw the bigs, I'll still be glad to add him into my alphabetical Jays collection. As best I can tell, this issue was his only card.

But there were some cards from the big league issues.

A nice trio of Jays. I'll have to keep my eyes peeled for Rockies goodies when I head off to the Expo at the start of May.


Posted by buckstorecards at 17:34