For the third staight year, I use my 2/14 post for a top 10 list involving cards in my 2/14 collection. And I use the theme of it being a top 10 of cards in my collection that were released over the past year, with no players being repeated. The lack of repitition is there to keep 5 Alshon Jeffrey cards from being part of the countdown. 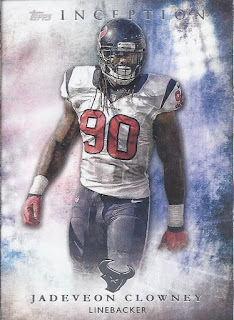 Clowney's rookie season didn't really live up to the hype one would expect from a #1 overall pick, so he didn't have the variety of cards to choose from this year. Still, I like the smoky spotlight background on this. Last year, a patch/auto of his got the #1 spot. This year, he just squeaks into the top 10. 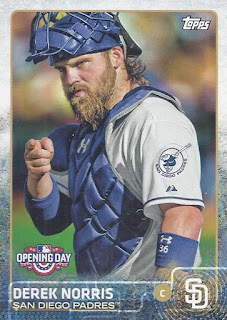 This would have been higher if it hadn't been a pretty obvious photoshopping. On the bright side, at least they included the swinging friar patch. 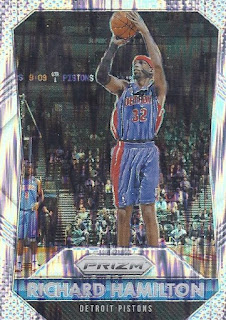 With no active 2/14 players in the NBA, I have to rely on the retired portion of the sets to add new basketball cards to the collection. Last year, it was Gheorge Muresan with a loud Prizm entry. This year, it is Rip. 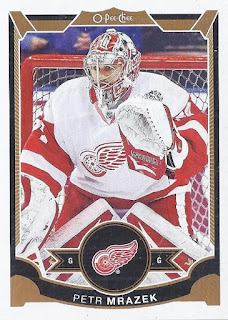 This combines my love of mask cards with a 2/14 card. Petr is actually having a really great season in Detroit, and I'm really glad my 2/14 love had me add some Mrazek cards early in his career, since they've really gone up since the start of the season. 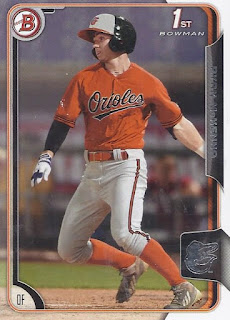 I love coming across new faces for the collection. I didn't even know that Draft had a 2/14 baby among their checklist until I picked up my only pack of the product. I landed both this and the chrome parallel in that pack, but opted for this one since it scans batter. 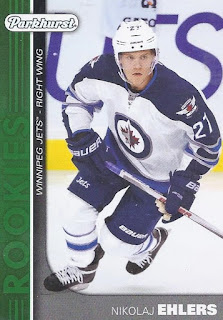 It has been alternating the past few years when it comes to notable 2/14 debuts between hockey and football. 2012 - Alshon. 2013 - Mrazek. 2014 - Clowney. And it is back to hockey for this year with Nikolaj Ehlers. This card was notably cheaper than his Young Guns card, so I opted for this one. In 2016, it will be back to football, as Penn State QB Christian Hackenburg is projected to be drafted in an early round. 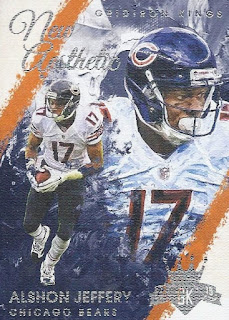 Alshon had to make some sort of appearance in here, and it was a hard decision as to which of his 2015 cards to pick. He had a great celebratory photo on his Score base card. I pulled a pair of nice foil cards, a 60th Anniversary insert parallel from Topps flagship, and a green /199 from the just released Topps Fire. But, I opted for this one and its even gaudier background. 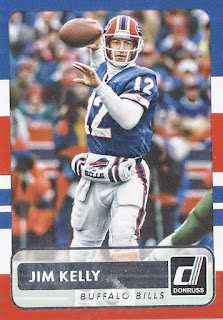 A simple card of my favourite member of the 2/14 collection, but it gets a high placing for the Bills colours in the border. 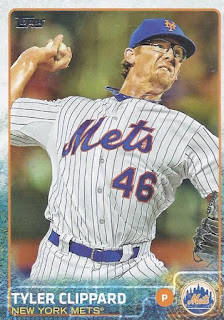 This one would be in the #1 slot, since landing a Mets card for the 2/14 collection became an awesome addition from my favourite baseball team to the collection. However, the photo is as unflattering as possible, and he is no longer a Met. 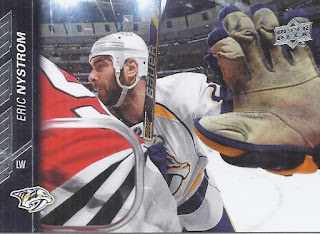 Some of my favourite cards in the collection feature spectacular photos. 1991 Stadium Club Walt Poddubny. 2013 Topps Derek Norris. 1997 Ultra Jeff Graham. While this isn't really the most spectacular of shots, it might be the most unique photo in the collection. A close up of a filthy hockey glove. A card only I might find interesting, but it works.

Posted by buckstorecards at 06:28