And this repack is a flashback to the last repack from 2015, one I picked up at the local card shows. $3 lands a repack with two visible hits, and some cards in the middle. I grabbed two at the last show, one football and one baseball (although this one didn't have two hits, only one, but that's for a later post). 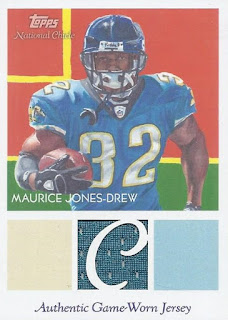 There's the first hit. As a fan of drawn cards, picking up this one was an easy decision. And I get this card, which included a nice coloured swatch to go alongside it. Unlike the base cards, which does include information on the artist, here, all you get is the 'Congratulations!' spiel. 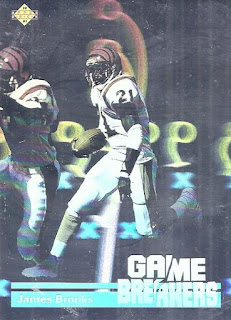 The cards in the middle lead off with this hologram. I really miss these inserts. 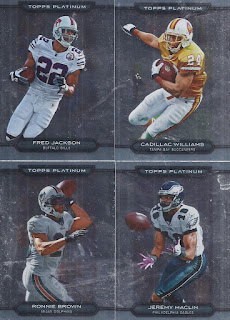 These ones were the most interesting to me of the bunch. A Bills card and Creamsicle uniforms start off. The Ronnie Brown passing photo is an interesting one to me, since he was a running back who would occasionally pass the ball out of the Wildcat formation. I love how the ball is highlighted away from Maclin's body on his base card. 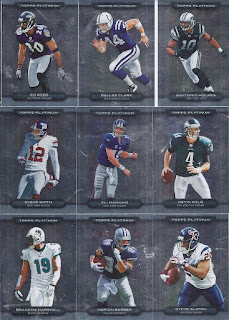 Here's the rest of the platinum. 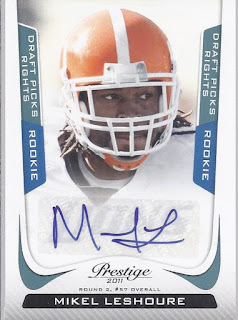 And the other hit. 2011 was not a good year for Lions second round draft picks, but at least he had a slightly better NFL career, and the first image that comes up when googled isn't a mugshot or an article about being arrested for assault, again. Instead, you get an article that he's bound for the BC Lions. Welcome to the 3-down game, Mikel!

And there you have it.
Posted by buckstorecards at 06:07