This year, the Buffalo Bills are not good. Both games so far this season have been decided by halftime, and with the Vikings being a 17 point favourite today, I'm guessing that's going to be three games with a similar characteristic. So, I'll return to the glory days, and post the Jim Kelly acquisitions that have been in my COMC to-be-posted box.

Edit: Note I didn't specify how the game would be decided by halftime. Call my 1-900-line! 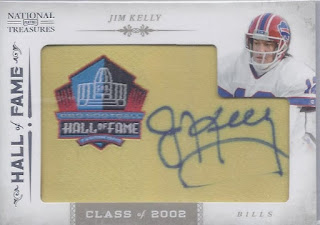 While I generally like to build to the big card in the respective post, I really couldn't resist going against the grain today with my second Jim Kelly autograph. It isn't really an on-card auto, more of an on-patch autograph. But, since he is the only football HOFer in the collection, it is an appropriate patch. You'll have to flip it over, but the card's numbered to 40, and the photo isn't the standard passing photo, but instead a hand-off. 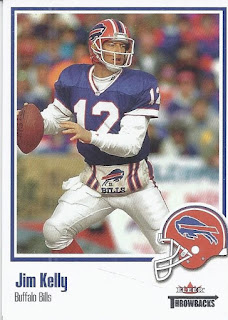 On to the more standard singles for this post, and a classic looking design out of the appropriately named Fleer Throwbacks. 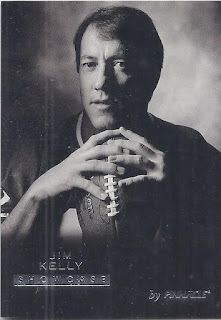 And if you want more of a Studio-ish card, here's one out of Pinnacle, with their Showcase insert set. 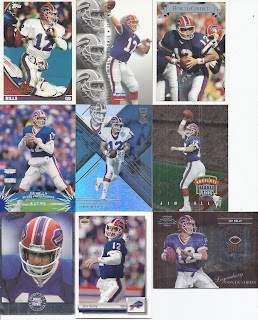 And a whole pile more of cards, enough to fill up a scanner bed. 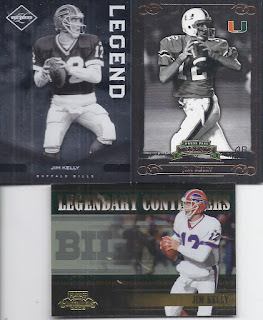 And a trio of numbered cards ends this post. A Hurricanes card really doesn't fit in with this post, but I figured it belonged here moreso than with the rest of the 2/14 football additions in a future post.

With these, Jim Kelly becomes the first football player to bust past the 100 mark in acquisitions, with 109 different cards. This also puts me past another milestone, with there now being over 2000 cards in the collection. WOO-HOO!
Posted by buckstorecards at 08:42