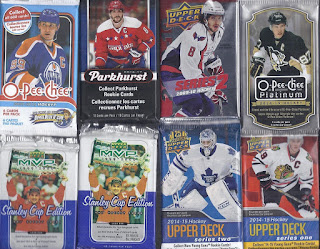 They'll be some variety in the cards in today's post, as 7 different sets remain. 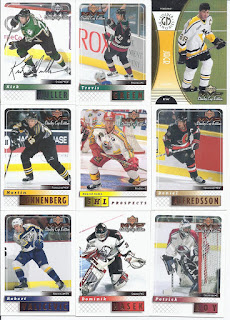 MVP definitely brought variety in terms of the cards themselves. A silver signature parallel (along with two of the regular base cards of Muller), a shiny insert, an interesting photo on Travis Green, a Swedish league card of a Sedin, Alfie, HOF netminders and players I don't remember. That's the fun of opening older packs. 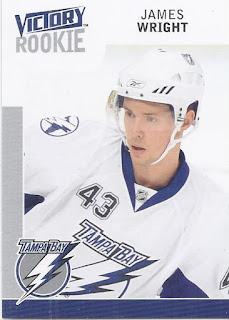 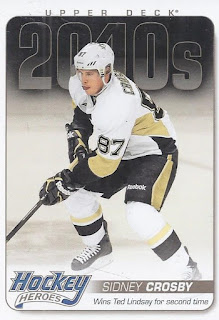 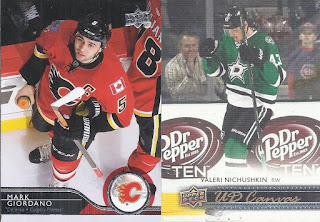 At least the last of the flagship packs landed me a new canvas insert, along with a pretty interesting photo of Giordano. Now there's a camera angle you don't see a lot of.

O-Pee-Chee wasn't too bad. Roenick as a Shark seems so wrong, but I can't imagine my miscellaneous hockey binders have any cards of him on San Jose. 2 of the other cards will fatten up my next package to Dennis @ Too Many Manninghams. 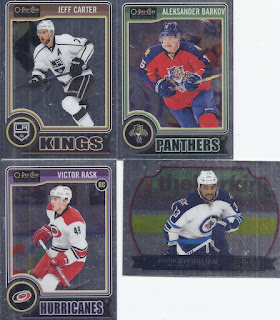 Only 4 cards in the Platinum. And here they are!

The second Sens card in this portion came from the most recent pack - the Parkhurst. I seem to have been a magnet for those Protectors of the Net cards in recent repacks. And hey, there's a pretty good rookie card in the middle of those two cards as well.

And there you have it. Some Dollarama repacks tomorrow, and then finally I'll start posting from my case of RA.
Posted by buckstorecards at 09:29