#Supertraders Turn my Mailman into a Hunchback

I was going to show off the goodies from two packs of Heritage today, but instead, I'm going to the mailbag and showing off some goodies that came from the Super Traders. Technically, only one is such an envelope, since one was completing a previous trade, while the other is from a long time trade partner.

Still, they were all on the list, and that's good enough for me! 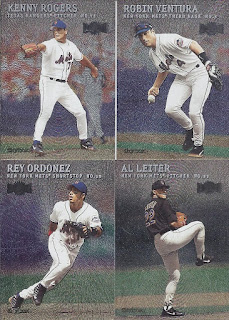 Starting off with a trade that was in the works just as everything was forming. Jared @ Cards My Mom Didn't Throw Out noticed I pulled some Arizona State alums from a pack of Elite Extra Edition. That started a small trade which included a lot of Metal Universe goodies. Unlike more recent sets with an etched background, these scan nicely. 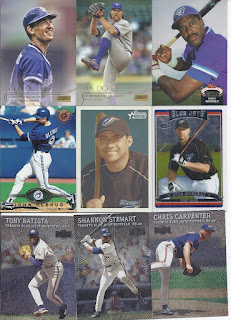 And more Metal Universe down here in the Blue Jays portion of the envelope. I still think any card of Tony Batista should have highlighted his batting stance. That's Benjie Molina in the middle.

Next up, an envelope from a frequent trade partner, Kerry from Cards on Cards. 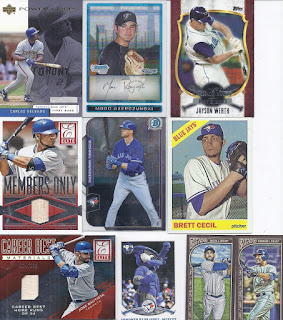 This was a very Toronto mailing. And there is lots of fun stuff here. Any new Delgado is a welcome Delgado. The X-Fractor next door is /299. I do appreciate the appropriateness of landing a Joey Bats bat relic. And who can hate getting anything mascot related in the mail? 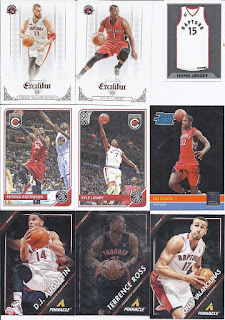 But since I'm a guilt-free basketball guy, the Raptors were the big part of this trade. Target had already departed Canada when Excalibur was released, so it is nice to add a pair of cards from there. I really wish there was some sort of retail version of Panini Complete on this side of the border, as it would be really fun to try and put together this basic set.

Finally, a first time mailing, as the #supertraders lands me my first Mark Hoyle envelope. I'm putting together a Boston-themed return package, but might wait to send it until after the Expo next month. 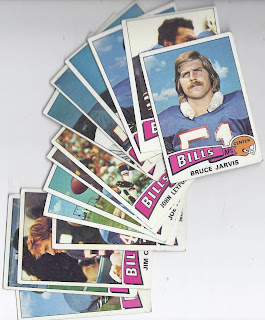 The big highlight was a pile of 1975 Buffalo Bills cards. This was only 4 off from the complete set, which I'd probably try to finish, if 2 of the cards weren't of some guy named O.J. Tony Greene and Ahmad Rashad were the other two. 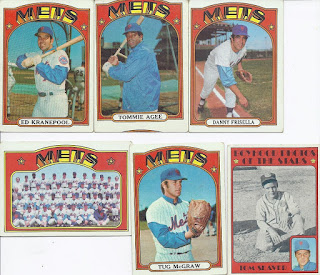 Vintage Mets! And yes, that Agee is beautifully off-center. 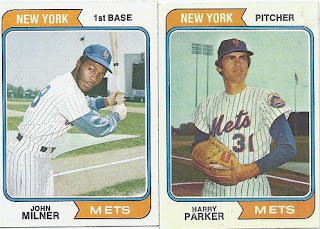 Thanks to all those that sent envelopes my way!
Posted by buckstorecards at 09:35