I have not been my typical self this week with my posts. At least in terms of showing off cards. 4 posts with one card, and 1 two-card post. Time to call my scanner back into service, and dig into one of those leftover from Target repacks I have yet to post. When Target Canada closed its doors, I picked up a bunch of repacks for future posts. And after this, I think I still have 10 left. Time to go a little lower end for a few posts, since I just did another COMC credit to Blowout Credit purchase.

Anyhow, this is a 10 pack repack. And these were the packs in question:

I'll start this with the various flagship sets, with the Updates and the 2014 S2. I'll hit the highlights of '13 Update and Series 2, since those are scanner-unfriendly 12 card packs, but will show the entire '14 Update, since that's a far nicer 8 cards.

Since I have all the cards from each of these base sets, the best I can hope for is interesting inserts, parallels and PC additions. Maybe an interesting photo or two as well for the misc. binder. Time to dig in! 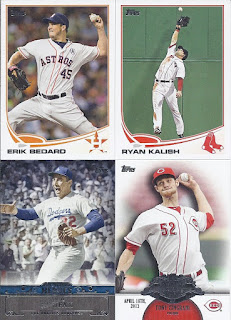 Well, the Koufax was a dupe, but Cingrani wasn't. The base cards did land me the nice photo of Kalish making a catch against the Monster, and a Bedard for the Cancon collection, so no complaints here. 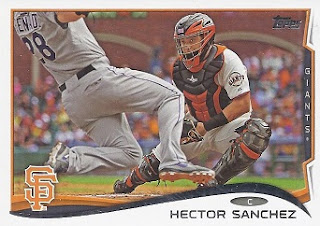 The first pack of '14 S2 was pretty bland. I guess I can kinda add this Hector Sanchez to my mask binder. So there is that. Such as it is.

Pack #2 was a little kinder. Although those die-cut minis were mega annoying when it to storing them among the minis from the previous seasons. Robbie Grossman wins the photo wars in this pack. 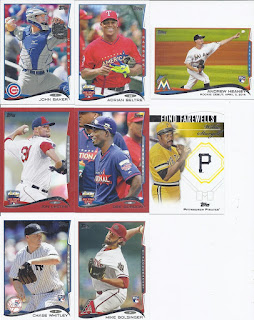 Wrapping it up with the '14 Update. Nothing much among the base cards except for a second baseball addition to my mask binder, but getting two parallels and an insert out of 8 cards is a pretty good result. Although if I were building the base set at the time, I might not be as pleased.