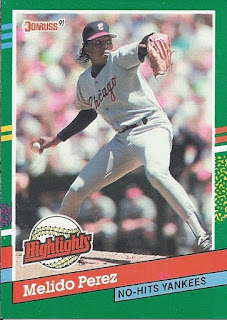 By 1991 standards, this would have been a pretty good pack of cards to grab at the LCS. Starting off with one of the inserts that saluted a year full of no-hitters in 1990.

And some decent names among the base cards.

When I saw the '03 UD in this, I was looking forward to busting the package, as it was the only one in the repack that I hadn't ripped previously. 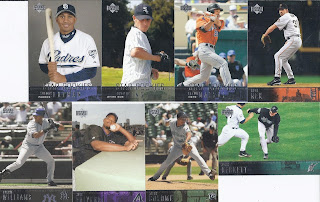 While an insert would have been nice, I'm still happy with the contents, landing a Mets card and some interesting photos. Ryan Wing's was definitely one of the more spring training scenery ones out there. Those orange uniforms on the Matsui were better left forgotten. Still, it is a Mets card. Valverde's is one where Wrigley Field in the background is just as much of a star as the player featured. And then there's the Beckett, which has a photo you don't see much of on a pitcher's card. Having the runner visible on the card makes it a bonus.

And there's a repack for you! Anything with a good number of keepers is a winner, and this applies to this one. Back to the mailbag tomorrow while I wait for my latest COMC Credit --> Blowout Gift Certificate boxes to arrive.

Posted by buckstorecards at 08:46