As I push myself past the 1300 card plateau for the collection. 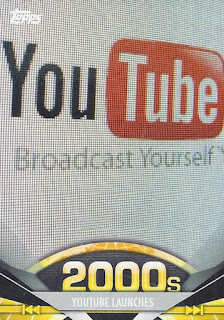 Since I do have events as a part of my collection (Statehood for Arizona and Oregon, the Michael Jordan wearing #12 card), this card fits in perfectly. In fact, since youtube came into being on 2/14/2005, it could be considered the youngest member of the collection. With apologies to Ryan McKenna.

And since you really can't mention youtube without linking to a video, here's a fan learning the hard way that trying to remove a luchador's mask is a major league no-no.
Muy mal indeed.

And that is the perfect segue into the next card. 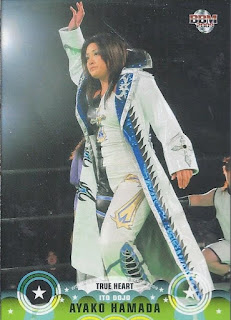 Nice as this card of Hamada is, the back of it is even better. 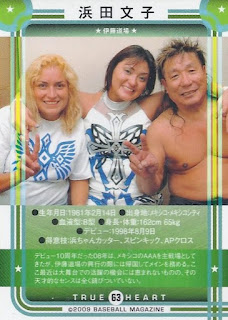 A wrestling family. How I wish this was the card front instead. This is my 5th card of her, as she leads the misc. portion of my collection. 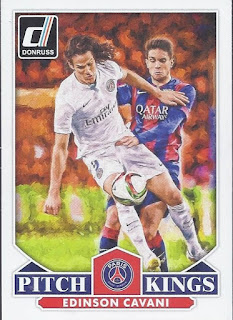 But, it is still only by 1 card, as it Edinson Cavani stayed one back with this addition. 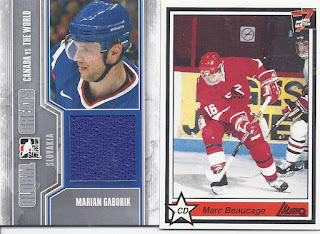 When it came to the main team sports, hockey was surprisingly last among the 4 of them. A nice blue relic on a card of Marian Gaborik joins the hits portion of the collection, followed by my second card of Marc Beaucage. All I need now his German League card to finish his cardboard chronology. At least according to zistle. 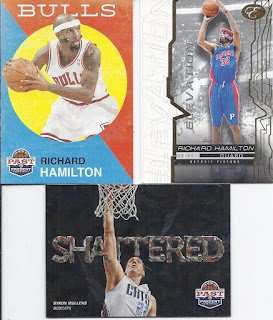 Basketball is second on the additions list. The Elevation card will go alongside a 1/1 plate I received in trade from Dennis @ Too Many Manninghams. There is definitely an interesting contrast in the two P&P cards. It doesn't show as well in the scan, but the Byron Mullens has the cracked ice feel to it. He becomes the third member of the basketball portion with double digit cards, joining Hamilton and Muresan. 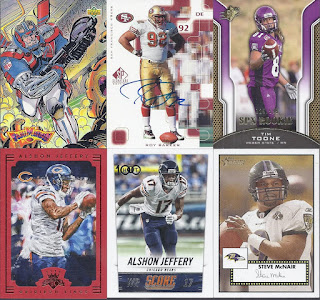 That's supposed to be Jim Kelly in the upper left. As Shotgun Kelly. Because a binder filled with people you share a birthday with isn't strange enough as is. My first hit of Roy Barker is next. That's also his only hit, as best I can tell. Tim Toone isn't irrelevant to my football collection, as I my second card of 2010's Mr. Irrelevant. There's a pair of Alshons on the bottom (how did I not have that base Score card?), followed by some Heritage football. Alshon and Steve are tied for second place in football with 38 cards each, trailing Kelly by 18. 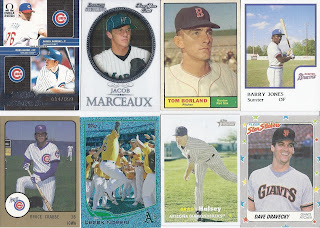 And baseball to end it. Daniel Garibay's 4th and final base card enters the collection. I've also got some real and faux vintage with the completion of Tom Borland's two-card Topps run, although there still is a 1960 Leaf card to chase. Bruce Crabbe joins youtube among the newcomers in this post to my collection. What are the odds I'd have two players named Crabbe (Callix) in my baseball collection?

Posted by buckstorecards at 08:07