Four (Times 2) if By Sportlots

Four is the amount of cards you can get from some sellers at sportlots before it goes beyond PWE cost. I used this with two sellers to knock four cards that were on my COMC watch list for cheaper than it would be to get them from COMC. All of these were cards I put on my wantlist when they came up during the Challenges. Long live my cheapness! 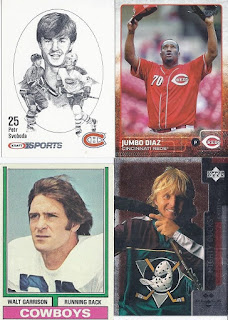 This group had the most variety of the bunch, hitting 3 of 4 for sports. Hockey is represented with a new Petr Svoboda for my 2/14 collection, and Espen Knutsen providing one of the creepiest smiles ever seen on cardboard. There's a guy named Jumbo Diaz with a card, and I just had to have it.  Why Walt Garrison to wrap this up? 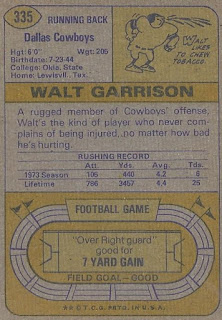 There's a cartoon on the back that hasn't aged well. Neither has this:
But at least the cartoon doesn't feature an asinine Chinese stereotype. 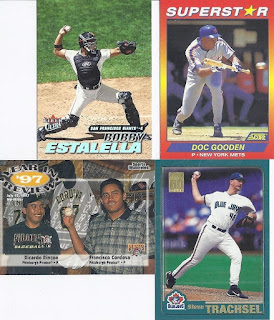 And this were the cards in the second envelope. The simple baseball paint job on the mask is enough to qualify it for the mask binder. Doc Gooden (I thought only Topps did that nickname thing) is seen with both a pitcher at the plate and a bunting card. The bottom left card salutes two pitchers who were the combined portion of baseball's only combined extra inning no-hitter. And I had no recollection of Steve Trachsel playing for the Jays, but he spent an unremarkable half season there in 2000 before going on to the Mets.

And there's two sportlots PWEs for you!
Posted by buckstorecards at 12:29