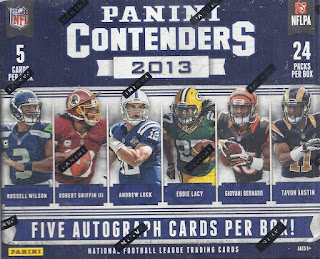 Time to wrap up the football portion of this shipment, with a box of a more popular annual release from Panini. The 2013 rookie class being less than stellar made this a cheaper date than one would expect from this set, but there are still some pretty good names to chase.

And for the first time in the break, the box fibbed to me. I ended up with an extra autograph beyond the promised 5. And that wasn't the only time that happened in these boxes.

Here's the Bills content in the base set. If you're a Bills fan, you'd recognize that all 3 of these guys are no longer Bills. And they're not the only team in the set with that feature. On the positive side, I'm only two cards away from the 100 card base portion of the set. Rashard Mendenhall and Danny Amendola eluded me in this box.

The only other Bills card in this was the Robert Woods portion of this insert set. The collation of the non-auto inserts was interesting throughout the box. If I ended up with more than one in a particular subset, they'd be in sequential order. Montee Ball was #12, Woods was #13 and Nassib was #14. 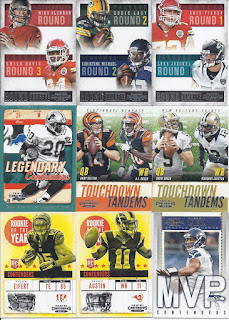 And the rest of the inserts. I really like all the colour on these this year. My favourite of the bunch is the Fisher/Joeckel, since it combines the top 2 picks. They were OL guys, which was the first time that happened in the modern era, and those guys never get any love in the hobby.

Here are the first batch of stickergraphs. Jaron Brown is the only one of these three still on the team pictured with here. I do like that Ware worked his number into his sticker. 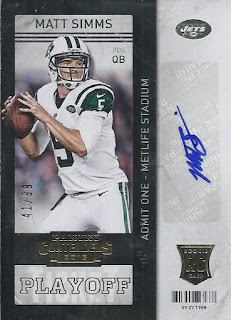 My only numbered card of the box was this Matt Simms. Phil's son had a cup of coffee with the Bills last pre-season.

A pair of on-card autos to wrap up the box. 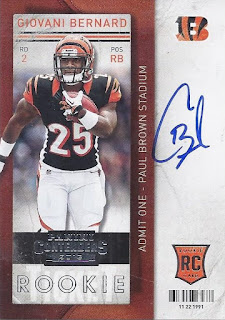 Hey! We've got one of the cover boys! A shame that nobody told Giovani that the signature was supposed to be vertical in this set. 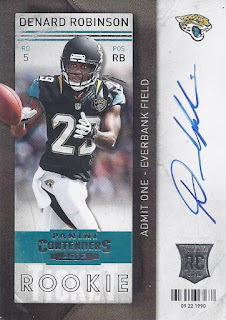 At least Denard Robinson got it right. Both on-card autos are bound for others though, with Denard bound for Too Many Manninghams and Bernard for the Cardboard Clubhouse.

And there's the box. Tomorrow - 2014 Panini Hall of Fame Baseball.
Posted by buckstorecards at 13:22