I cashed in some of my COMC credit for a $250 blowoutcards gift card, and grabbed a quintet of hobby boxes with it. With no real pattern to them, the only way I could think of to give myself some kind of order to the posting was to do them in order of release date, I'll start with 2010 Crown Royale, one of the two football boxes I bought. 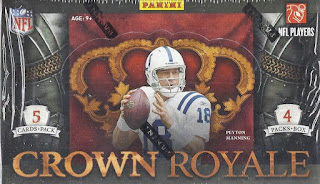 This box might be one of the more compact hobby boxes I've seen. It was maybe 2/3 the size of a typical blaster, with the 4 packs stacked vertically. The box does lie though, as each pack contained 6 cards. 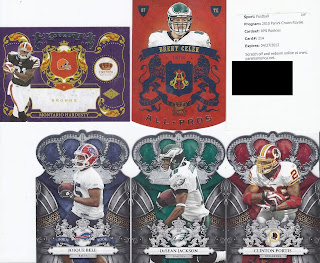 And here's the first pack. It was a Montario Hardesty hot pack, as the redemption was for his card as well. Each pack contained two cards from the 100 card base set, a rookie, a hit, and then either two inserts or parallels. Joique Bell was just released by the Lions, but he's still a Bill here, so I automatically like this pack. Plus, his name makes me think of the JOIKE sweater from MST3K's Santa Claus experiment. 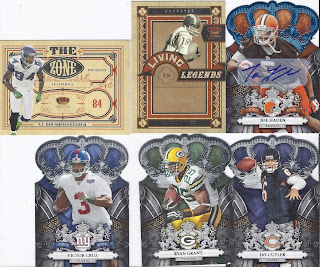 Not a bad auto to get. Haden has made a pair of Pro Bowls, but is coming off a concussion-shortened season in 2015. Not a bad rookie card either with the Salsa King. I like the black and white photo used for the living legends subset. 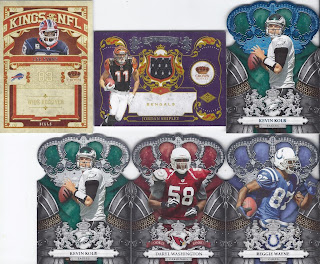 Yegads. The relic doesn't even fit the already small window in this card. But, the second Bills card of the box more than makes up for it. Of my 3 rookie hits, only Haden is still an active player as I type this. 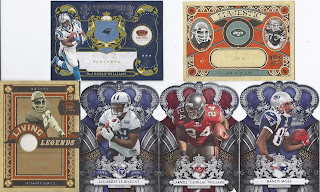 But this last hit is really nice. It might be a plain white swatch, but it is one of a Hall of Famer. The white actually works better with the design than would a red swatch.

Probably the worst of the 5 boxes, but there were still two decent hits and some nice inserts. As with all of these boxes, there will be some cards put aside for #supertraders.