Whether vintage or recent, I made a few additions to those binders at the show. 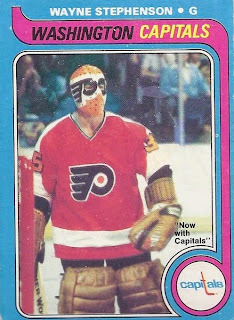 The great Flyers mask works perfectly with the jersey on this card. They seem almost symmetrical, and you want to ignore that "now with Capitals" in the corner. 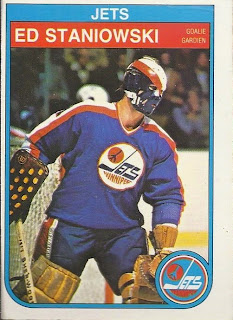 This might not be as detailed as Stephenson's, but check out those eyeholes. Those might be the smallest that I've ever seen on a mask. Although that does make it look more intimidating. That might not be the most worthwhile trade-off. 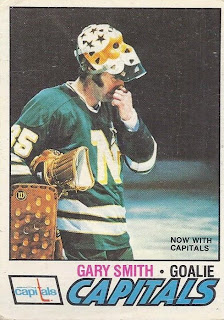 Another perfectly coloured and simple mask, ruined by a "Now With Capitals". 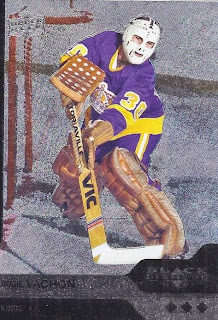 And the simple white mask works perfectly on this Black Diamond card. 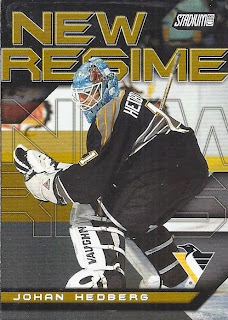 Still with the pre-2005 portion of the binder (which goes by the photo, not the card issue), one of my favourite recent motifs with the moose theme. 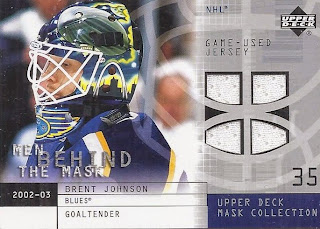 And finally, a hit for that binder. The Arch makes sense for a Blues mask, but what's with the blimp? A quick googling shows that he's a Led Zeppelin fan. And now it makes sense. 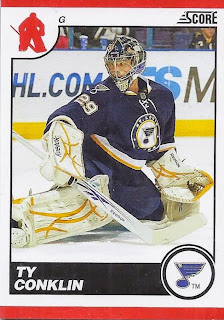 From one music-themed Blues mask to another. This time, one far more appropriate for the team with the Blues Brothers. Or at least Jake. Elwood is on the other side. If he'd gone for the Jim Belushi, that would be the best way of asking for a trade in a non-verbal manner ever. 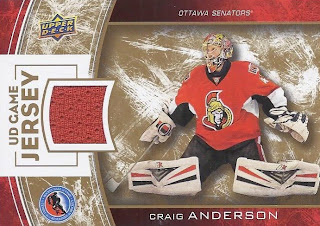 And to wrap this up, somewhat of an oddball that might end up in either the masks or Senators binder. This wasn't a pack card, but was instead part of a giveaway at the HHOF this past summer. If I recall correctly, you had to show up on a specified day, wear something with the team logo on it, and you'd get a card. I would have loved to have made it for that, but I really don't need an excuse to go to the HOF.

8 more cards off to binders, and I'm surprised how efficiently I'm working my way though the Expo box.
Posted by buckstorecards at 18:15