I knew I'd have to start digging into this at some point. Now is as good a time as any. I might as well show off the contents of an 800 count box worth of hockey cards sent from JBF. I sorted through the box by team, and that's going to be how I go through these.

So I don't end up with more than 30 posts from this, I'm splitting this even further, and will be posting the rest by divisions. The final group will be for the non-NHL/relocated teams, and that's what I'm leading with today.

I'm not posting everything, but will try to hit as much as I can.

And since everything fits in the box so perfectly, I'm keeping all the cards in the box instead of bindering them, excepting cards that move into my non-team PCs, and trade material. 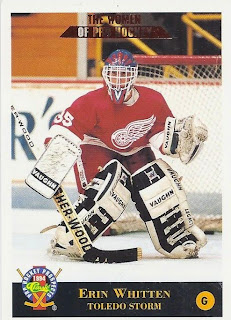 Starting off, how about Ladies First? Classic wasn't just about Manon Rheaume. There was other representation from the distaff side, at least in this set. This set also included an appearance from future HOFer Cammi Granato. 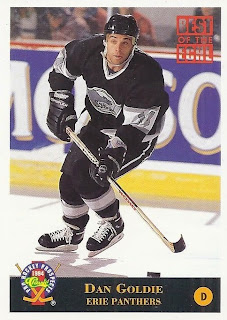 Another card from this set features the first Erie Panthers card in my collection. 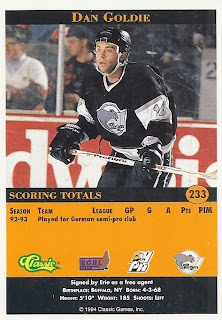 And also probably my only card that includes the text "Played for German semi-pro club". 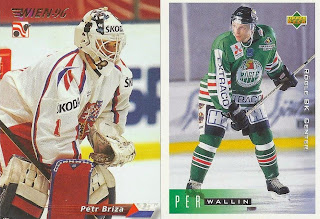 And that acts as a perfect lead-in to this pair of European cards. And uniforms which might have more ads than your typical NASCAR vehicle. Although I am curious what creature that is lurking on the side of Petr Briza's mask next to the Skoda ad. It looks like one of the "God kills a kitten" Domo-kuns, but this mask precedes that creature's creation. 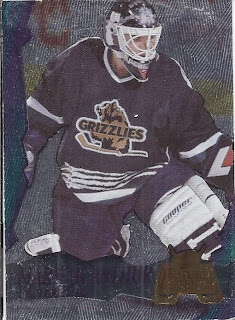 I love that logo for the Utah Grizzlies, circa 1995 or so. Simple, but ferocious. 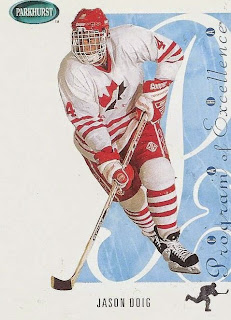 And some cards with an international feel thrown in for good measure to wrap up this portion of the cards.

And now, on to some relocated NHL teams. 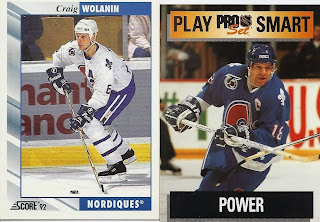 The Nordiques portion of the collection included a pair of Kitchener Rangers alum with Craig Wolanin and Mike Hough. The latter was part of the Memorial Cup winning 1982 team that also included Brian Bellows, Scott Stevens and Al MacInnis. 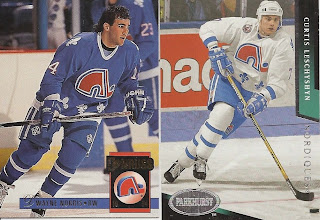 But the best thing about old Nordiques cards is some nice shots of those great uniforms. 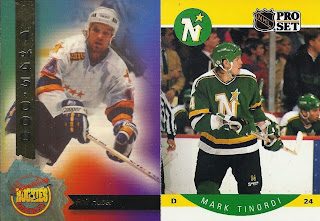 Ditto for North Stars cards. I don't know what jersey that is in on Phil Huber, but he's listed as Minnesota on the back. The cards refer to the Kamloops Blazers on the back, but that isn't a Kamloops jersey, and he was several years removed from the WHL. Villach VSV seems to be the most likely culprit from this 1994 release. 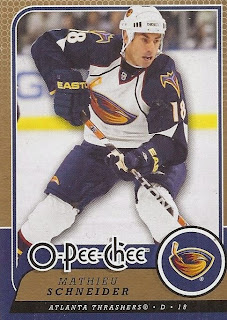 The fun thing about this was coming across cards of folks and being reminded "Oh yes. He did play for them at one point." In this case, Mathieu Schneider and his half season in Atlanta. 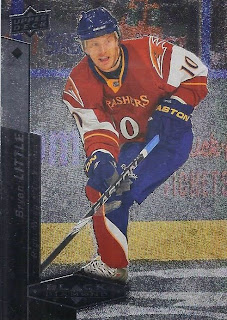 And also being reminded. Oh yes. The Thrashers did wear this uniform at some point. 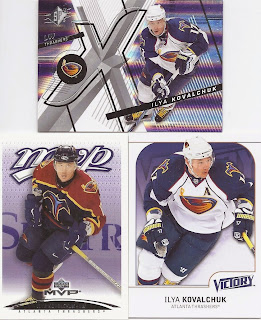 The Thrashers portion was populated with these cards of Ilya Kovalchuk. Who might be returning to the NHL soon, seeing as the ruble's trip into the pisser has made him probably lose more money than Krusty the Klown lost over the '84 Olympics. Without any burgers for him to spit in. 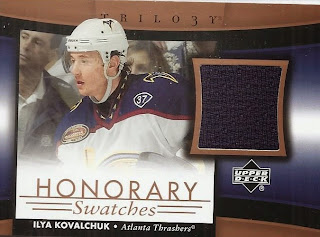 Oh yes, there were hits included in these as well. So those three Ilya cards weren't posted just so I could throw in a classic Simpsons reference. 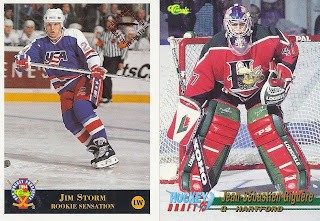 Since the name 'Hartford' appears on both these cards, they will both be bound for Shoebox Legends at some point. 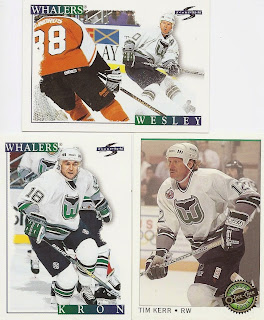 But since these aren't on his zistle wantlist, I'm keeping these! 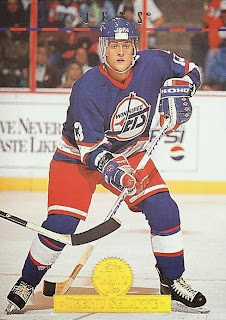 And finally, here's the old school Winnipeg Jets highlights. While going with an early card of Teemu would seem to be a good choice. 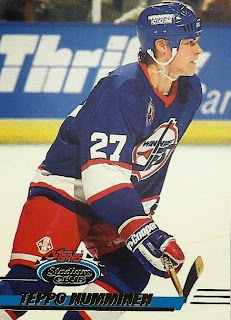 But how can I vote against one of the more fun names to say in NHL history in Teppo Numminen?

And there's the highlights of the first portion of the box. I don't think I'll go 4 straight days to finish it off, but I really should try to work my way through it by summer.
Posted by buckstorecards at 13:28