Mainly Masks, in an envelope from 2*3 Heroes

Time to power my way through another large envelope that showed up, while a couple of smaller ones stay on the back burner for now. 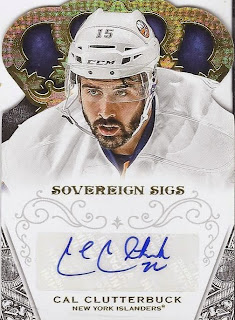 Technically, this wasn't part of the trade. This goes all the way back to 'tis the season. One of my favourite names in hockey, simply because the last name is so much fun to say out loud. Clutterbuck. Clutterbuck. Try it! 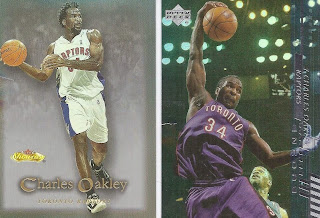 While, as the title indicates, the package was mainly masks, it wasn't just limited to hockey. This pair of basketball cards also found their way into the bubble envelope. 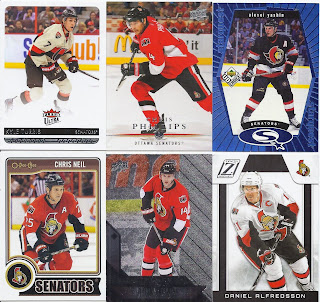 As did some Sens for that binder. The Alfie is a dupe for my Alfredsson collection, but not my Sens collection.

I hinted at this yesterday, but this was the definite surprise of the mailing. It wasn't just these three - it was the complete set from this year's National Hockey Card Day release. I just hit the best cards for me. Johnny Hockey, a Senator, and a guy named Rocco Grimaldi. Sounds like the name for some bumbling gangster sidekick in a kid's movie.

But, now, the masks portion, of which there probably twice as many than I've scanned. 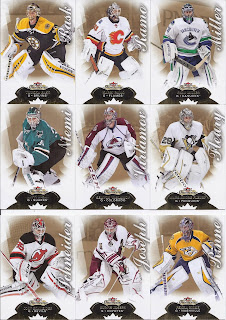 I think I got every netminder in the Fleer Showcase base set. There were more where these came from. 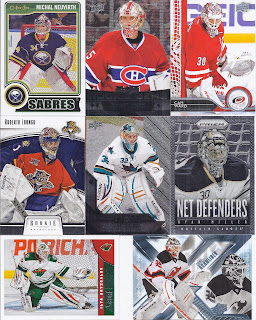 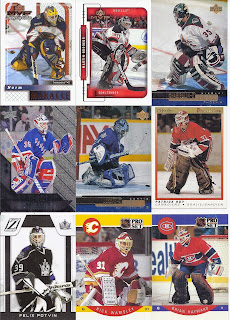 And some for the pre 2005 binder. As I've said before, I go by the photo as opposed to release date, which is why Potvin is here. And it is strange that I find the colourful Pro Set cards really becoming more and more interesting to me as time goes on. Maybe it is just because their second release was so bland.

So, thanks for these goodies.
Posted by buckstorecards at 13:35