Excepting a vintage card that will probably get posted during some random insomnia bout, this will put an end to the singles portion of the Expo (aside from what will show up on other blogs in the near future). 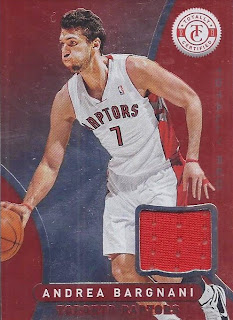 Since basketball comes first alphabetically, I'll start with those. I'm well aware that Bargnani's time in Toronto was not exactly what you'd want from a #1 overall draft pick. But, I'll still add one of his relics to my collection for a dollar. Because as memorable as his stint here wasn't, at least he'll have the pasta commercial. 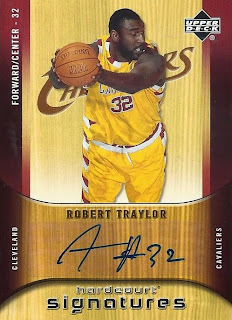 I'd actually prepared to get some hockey hits for Dennis @ TMM by bringing a list of all the hockey hits he had. I should have brought a basketball list as well, because I would not have picked up this dupe. So, I guess I'll hold on to this auto of the late Robert Traylor for myself. 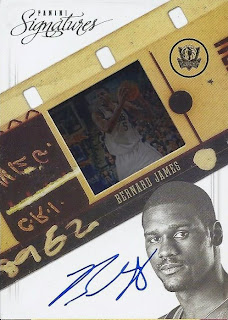 And the basketball portion of the post wraps up with an on-card autograph of a player who took an interesting route to the NBA. From his wiki:


He initially planned to make the military his career, but was drafted onto an intramural basketball team at his base. During this time, he underwent a growth spurt of 5 inches (13 cm), and soon rose through the ranks of military basketball to the Air Force's all-star team. This in turn led him to pursue basketball as a potential career path; when his enlistment term expired, he left the Air Force and enrolled at Tallahassee Community College so that he could eventually fully qualify for NCAA Division I.

Definitely unique. I also picked up a second card of his to send to Mavericks/auto collector JBF. 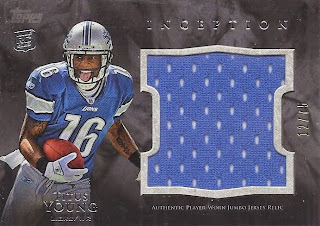 From someone who took the long route to the NBA, to someone who managed to blow his NFL career. There's a  contrast for you. At least the swatch looks nice with the card design. 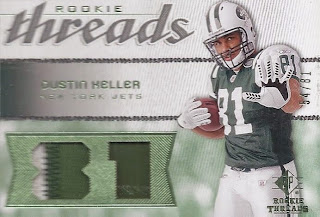 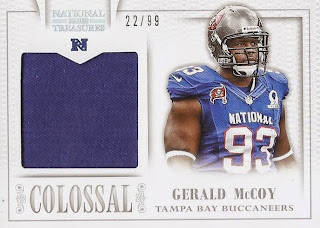 But at least this guy is still in the league, and still on the team he's listed with. A nice sized Pro Bowl relic as well. 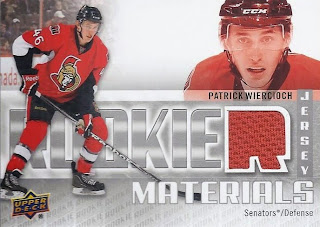 Of course I'm going to grab at least one Senators hit for my collection. And this was the one. Not an Alfedsson. Not a Karlsson. A Patrick Wiercioch. 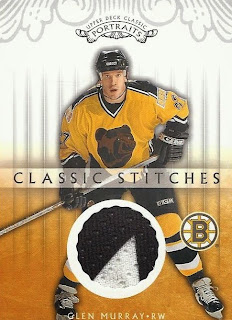 And a single Bruins relic as well. Since I don't recall that pattern appearing on the regular Bruins jerseys, it does appear that this particular swatch was cut from like the one pictured on the card. 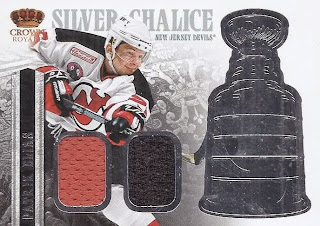 And this one of those cards I picked up just because I liked the design. A nice usage of the two colours and a nice working of the Stanley Cup into the design. The windows are supposed to be zeroes, representing the 2000 Stanley Cup victory of the Devils. A really nice looking card for someone who played every NHL game with the same team (as of this posting).

And there's the end of the singles. But, the Expo recap isn't over, as I have yet to show off the contents of my Opening Day or Gypsy Queen box. That's what the weekend is for.
Posted by buckstorecards at 12:48