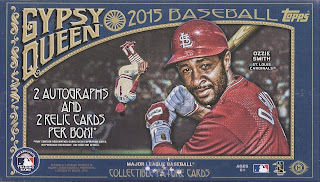 And now, the second box that I grabbed at the show. 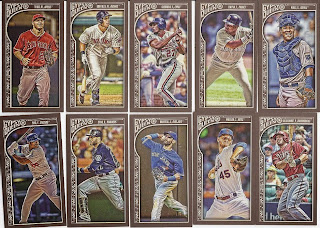 Starting off, here's the content from the mini box with 10 mini parallels. Starting with a Trout, ending with a Puig, and throwing in a Bautista, a Wheeler and a Vlad makes for a really good mini box. 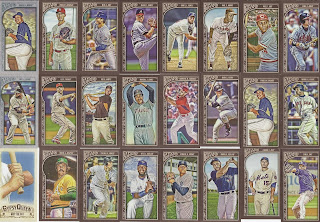 Not enough minis for you? Here's all the rest of them. The Hunter is a SP mini, which should come at a rate of 1 per box. The basics of baseball are also 1 per box, and the silver minis are two per box and are numbered to /199. Peralta and Ortiz are OK when it comes to 2 per box parallels... 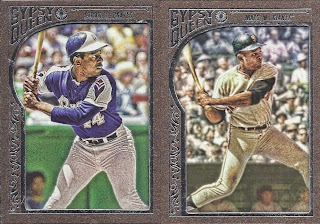 But I am more in love with these two bronze framed parallels of Aaron and Mays. That Aaron with the feather on the sleeve is the only base card that might come close to the Satchel Paige that I found in my first hanger box for being my favourite base card in the set. It is a re-used photo, but it does appear that there have been several years between usage, and it had yet to receive the GQ treatment. 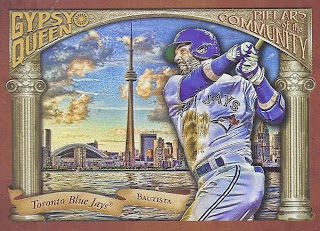 Coming one per box, and already having got the David Wright from a case break, this was the Pillars of the Community card I wanted. And got. 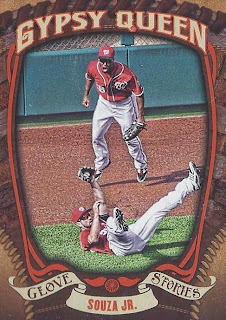 There were several of the Glove Stories inserts in the box. I opted for this one with the photo choice that makes the catch secondary to the reaction to it. 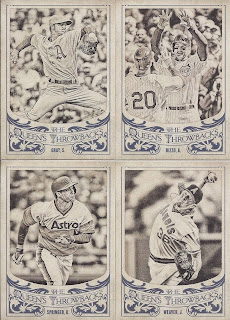 But, that's secondary to The Queen's Throwbacks inserts. Unfortunately, two of these are re-used photos from the Flashbacks subset in Opening Day - the Rizzo and the Springer. Looking at the rest of the subsets, the Machado and Castro  also appear to be reruns. 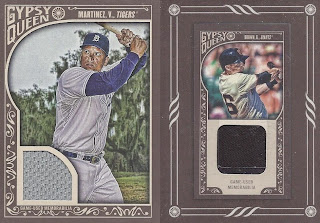 On to the hits. Not the most spectacular relics. Gary Brown debuted late last year for the Giants, seeing 7 plate appearances. At least that's enough to get him a WS Ring. But he's on his third team so far this calendar year, now in the Angels system. At least it is a slightly uncommon baseball relic colour. At least Victor Martinez is still in the bigs. 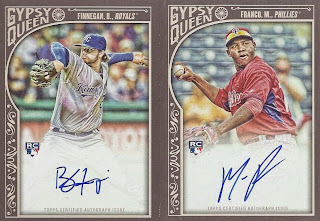 But the autographs were pretty good with a pair of promising rookies. I really like getting the Finnegan, since he's one of the interesting "only player to" types. In his case, the only player to play in both the college and MLB World Series in the same year. Franco's also a pretty good prospect. So at least that's a nice recovery from a some bland relics.

And there's the box. I'll probably do a slow build of the set, knocking off SPs as the opportunity allows.

And with this, the Expo wraps up, minus a 1960 that will be an insomnia post at some point.
Posted by buckstorecards at 13:14