Time to continue this 800 ct box worth of hockey with a division-by-division work through. LEading the way, the 8 teams of the Metropolitan division.

And I'll start with Washington, for the simple reason that... 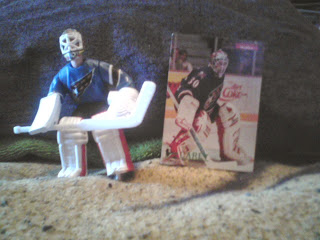 it is a good place to post the second of the two Starting Lineups that were in the package. This is the Jim Carey. It does seem like a good addition to my mask collection, if it were flatter, since the (removable) mask mask that came with it does include a pretty good representation of the eagle/aces mask he wore around this time.

As for the individual cards, way too many to show, but I'll hit the by team highlights. 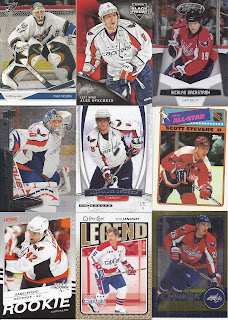 Leading off with the Capitals. A couple nice highlights here. There's a SP of Langway, a Scott Stevens for my Rangers alum collection, a Black Friday card, and an appearance of the Kolzig Godzilla mask. 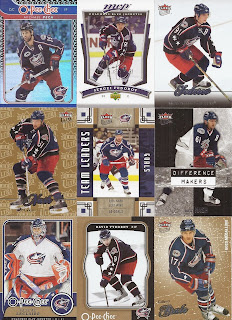 Columbus did present a plethora of Rick Nash cards, but we had a couple 'Oh yes, Federov did play for them" reminders. And a three pack of gold/shiny parallels. 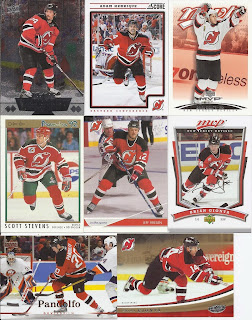 More Scott Stevens in the Devils portion. Brian Gionta seemeed towin this battle in terms of volume, but I like the Jeff Friesen for the same reason I like the Blue Jackets of Federov. I'd completely blanked on his stint there. 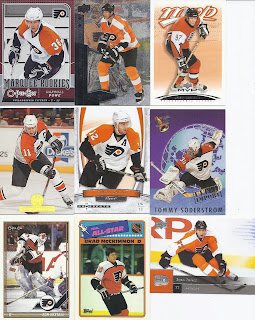 Wow. While I did remember Roenick's time in Philly, I'd blanked on that jersey style from that mid 00's time period. That's probably a good thing, in retrospect. 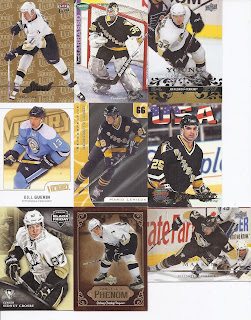 Their cross-state rivals had plenty of cards from the usual suspects. Malkin. Crosby. Lemieux. I had no clue what set that middle card was from. COMC research showed it to be from something called " In the Game Be A Player Signature Series Retrospective". While I love the Black Friday card and the great photo on the Malkin, the winner here has to go to the throwback uniform on Guerin. 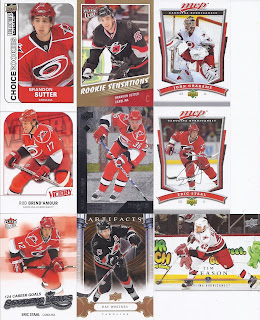 There were Staal cards among the Penguins, but they were dwarfed in volume by the Staal cards with the Carolina Hurricanes. The big win here are the two new Brandon Sutters for my 2/14 collection, with these being my 21st and 22nd cards of his. 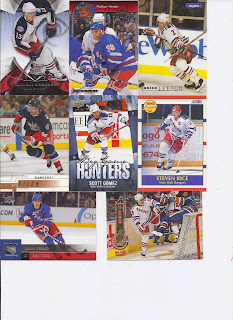 Unfortunately, this Gaborik was a dupe for my 2-14 Collection. But, this Rangers portion of the set does show the insane variety of sets that made at least one appearance in the box. BTW, that's a Kitchener Rangers, not a New York Rangers jersey on the Steven Rice. The local rink board advertising and his sudden ascending to the captaincy are the big giveaways. 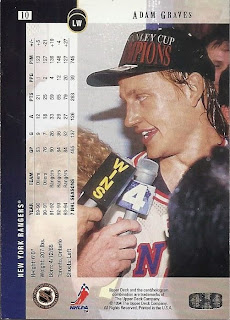 The best "Photo on the back" goes to the Rangers. 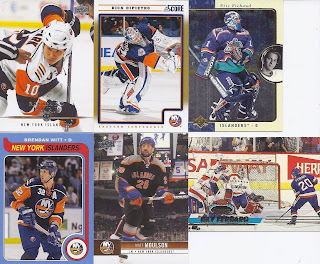 The Islanders were the sparsest of this division for base cards, but there are some winners here. the fisherman jersey isn't a winner in the traditional sense, just a nice oddity. But the team recovers with a 79-80 Retro parallel, and the best photo of this division with the perfectly timed Ray Ferraro. 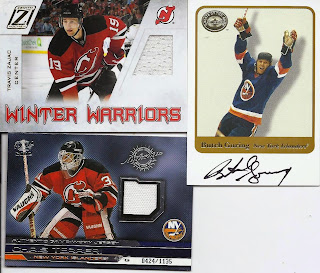 But the Islanders recovered nicely, with a pair of hits. Love that Butch Goring auto - one of the better names in the history of hockey. He doesn't have that many autos available, so I'm really glad to add this one to my collections.